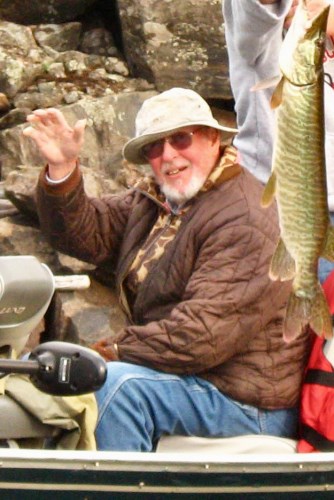 Charlie was born on June 5, 1930, in Midland, Texas. He grew up as a Madison east side boy, meeting his future wife, Dolores A. Michaelis, and marrying on June 28, 1952. He worked for Kroger Foods in Madison for many years, before transferring to the warehouse management team in Nashville, Tenn.

He returned to Madison and his beloved east side to purchase The Bottle Stop Liquor Store on East Washington Avenue in 1965 with his wife, Dolores. He loved his business and his customers, treating all like family. He was always quick with a joke and a smile and, of course, his latest fish "tale" or hunting adventure.

As his family grew, so did his many interests. He became a pilot, and owned his own Cessna aircraft. He also was a co-owner of the Frickelton flight school in Madison. He and Dolores eventually bought another liquor store in Rhinelander, Wis., flying his plane between stores.

He was also a Mason and belonged to the Madison Zor Shrine clown unit, participating in many activities that supported the Shriners Children's hospitals.

He was preceded in death by his parents, Henry and Chattia "Chattie" Toycen; wife, Dolores; son, Thomas; companion, Liz Weger; and many other friends and extended family.

Per dad's wishes, no services will be held. A celebration of his life will be scheduled at a later date when we can all safely gather together again. In lieu of flowers, please send memorials to Shriners Children's Hospital.

Thank you for choosing us.

We love you dad

To plant trees in memory, please visit our Sympathy Store.
Published by Madison.com on Nov. 15, 2020.
MEMORIAL EVENTS
No memorial events are currently scheduled.
To offer your sympathy during this difficult time, you can now have memorial trees planted in a National Forest in memory of your loved one.
Funeral services provided by:
Cress Funeral & Cremation Service
GUEST BOOK
1 Entry
I always loved talking with Mr. Toycen and his friends when I would go into Bottle Stop. He enjoyed hearing about days fishing with my dad and we'd trade fishing stories and jokes. I loved his laughter, warmth, sense of fun. My heart goes out to all of the family because he was a true treasure of a person.
Kate
November 15, 2020