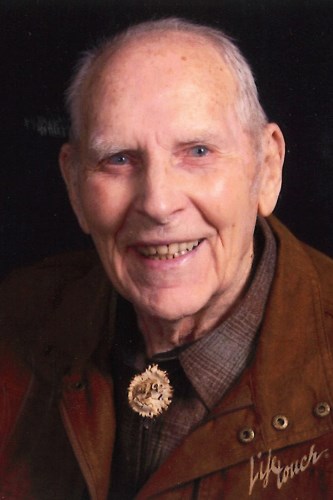 WESTBY - Clarence C. Olson died where he was born, Oct. 28, 2020, in Westby, Wis. Clarence was born on Jan. 2, 1923, to Otto and Ella Olson on the family farm homesteaded in 1848. He attended a country school and graduated from Westby High School with honors in 1942. He attended Platteville State Teachers College, leaving to join the Navy during World War II. In the Navy he was a member of the V-12 program where he played in its concert, marching, ceremonial and dance bands. Upon discharge he enrolled in the University of Minnesota, earning a bachelor's degree in dairy science, a master's degree in genetics and later a Ph.D. in nutrition.

Clarence began his employment as an Extension dairyman at the North Dakota State University, in Fargo, N.D., where he led programs to revitalize the dairy industry after World War II. He was joined by his new wife, Louise, and there they parented their four children. In 1961 he joined the University of Wisconsin Dairy Science Department as a leader of educational and training programs for the National Dairy Herd Improvement (DHIA) program. Under his leadership, participation by farmers increased to include well over half of all dairymen in the state, and average milk production per cow more than doubled. His major accomplishment was to replace the Babcock test for measuring butterfat in milk with a quick, highly accurate test that was immediately adopted by the dairy industry nationwide.

Come summer, he would load up the camping trailer, and his family would be off to judge county fairs. Clarence greatly influenced the history of county fairs by organizing training conferences for those aspiring to become judges. At farms, he would assemble classes for practice judging and evaluate their skills. With this data, the educational value of fairs and the benefits of the dairy 4-H program were greatly increased. In his career, he judged over 300 county fairs and numerous regional and state fairs.

Clarence was the consummate educator and recognized that farm women were not receiving the knowledge needed to be the partner of a successful farm. So he organized Dairy Schools for Farm Women. Under the theme "Partners in Better Farming," nearly 10,000 farm women received diplomas from this training designed to make them proficient in decision making and farm skills.

In retirement, Clarence became proficient in Norwegian rosemaling art and won numerous awards at state and national shows for his basic and original designs.

Clarence was active in his community as a member of Bethany United Methodist Church and its choir, Trout Unlimited, Ygdrasil Literary Society, Epsilon Sigma Phi, Middleton-Ionic Lodge, Scottish Rite and 32nd Degree Masons. He was especially committed to the Boy Scouts, where he earned the Council's Award of Merit, Silver Beaver and Lifetime Achievement Awards. He twice received the National Scoutmaster of the Year Award.

Clarence was an avid gardener, and his vegetables, fruits and flowers knew no bounds. He taught these skills to his family so that they too would enjoy the year-round benefits. He was a devoted husband of 72 years. He loved his children, grandchildren and great-grandchildren dearly and was active with them in their careers and activities.

The family would like to thank the staff of The Gardens Independent Living for their care and support.

Memorials may be made to Bethany United Methodist Church, Glacier's Edge Council Boy Scouts of America, or UW School of Agriculture.

Published by Madison.com on Nov. 1, 2020.
To plant trees in memory, please visit our Sympathy Store.
MEMORIAL EVENTS
Nov
4
Funeral service
12:15p.m.
The Zoom link for the Masonic Service is https://us02web.zoom.us/j/84853085416
WI
Nov
4
Graveside service
1:00p.m.
The zoom link is https://us02web.zoom.us/j/81246782184
WI
Funeral services provided by:
Cress Funeral & Cremation Service - Madison West
MAKE A DONATION
MEMORIES & CONDOLENCES
Sponsored by Cress Funeral & Cremation Service - Madison West.
7 Entries
Clarence was a kind and generous man. My husband enjoyed spending time with him discussing the Boy Scouts. He was also a gifted artist who enjoyed sharing his passion for rosemaling with others. He will be deeply missed by all who were lucky enough to know him.
Thorton & Jill Ridder
November 6, 2020
Jim, condolences on father passing.
Scott Wille
November 6, 2020
Clarence was a wonderful person. He and his wife were a great couple. He served the Boy Scouts extremely well and was faithful to the Scout Oath and Law.
Ron Berman
November 4, 2020
It is with sympathy to learn of Clarence's death. He was a very special UW Extension Dairy Specialist and ESP member. His capturing of events by photo was special. The fond memory the two of us shared when he was a dairy judge at Clark County fair and I was a family living area judge and he wanted a hitch hike ride to Black River Falls. Well I offered that ride to him. How he got from BRF to Madison (?) I am not sure. My husband always warned me never to pick up hitch hikers! Clarence smile and friendship will never be forgotten. Also Ruth I share with you your loss as well and early on of your sister Pearl. I hold the family in my thoughts and prayers. Bless be Clarence's memory and all his contributions to education with UW Madison, Division of Extension. Nyla Bock Musser
Nyla Bock Musser
November 2, 2020
Our thoughts and prayers are with you and your families during this difficult time. He certainly leaves a tremendous legacy and family
Robert and Barbara Zeimet
November 1, 2020
What an amazing soul. He was greatly admired. Heaven just got a good one!
Melanie Miller
November 1, 2020
Offering our deepest condolences during this difficult time.
The Staff of Cress Funeral & Cremation Service
November 1, 2020
Showing 1 - 7 of 7 results