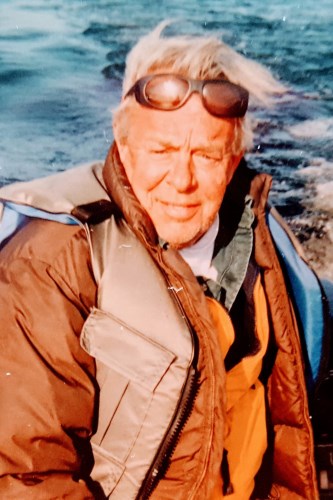 PORTAGE - Our beloved husband, uncle, brother/in-law, cousin, friend and decades-long fishing buddy passed away on June 8, 2020, at Agrace Hospice in Madison, after a brief illness.

Sandy was a remarkable, talented, loyal and loving man who lived his life with enthusiasm, creativity, and determination. Adopted as an infant by Dean Sr. and Louise Ball, Madison, he was introduced early on to the lure of the outdoors. Fishing, wilderness camping, snow skiing, hunting and boating were lifelong passions.

He raced hydroplanes competitively in his late teens, served on the Ski Patrol in Wisconsin and Colorado, hunted pheasants on his grandfather's South Dakota farm and ducks on the Mississippi River from his comfy old houseboat. He pursued every opportunity to camp, canoe, ski and fish across much of the U.S. and Canada. The deeper the wilderness, the better he liked it.

Sandy studied at Layton School of Art, and his careers opened doors. As a University of Wisconsin Photo Lab photographer, Sandy was an official Team USA photographer for the 1968 Olympics in Mexico City, working in conjunction with photo lab director and filmmaker, Professor Walter Meives. They traveled with the team, first in Denver during pre-Games altitude conditioning, then in Mexico City and Acapulco.

In 1962, Sandy married Betty Walker, and together they shared the Olympics experience along with a love of the outdoors, canoeing and camping in remote areas of Quetico Provincial Park, and the Maritime Provinces, skiing in Colorado and Montana, and road-tripping coast to coast.

In subsequent years, Sandy found his longtime niche as a medical equipment sales representative, working with hospitals in Minnesota, Wisconsin, Illinois and Iowa. He lived in Eau Claire for several years, relishing life on the water from his home on Lake Altoona when he wasn't on the road.

Though they had divorced in 1972, Sandy, Betty and their families remained amicable friends. In 2004, to the surprise of many, they remarried, resumed traveling, enjoying their home on the Wisconsin River and winter months on Anna Maria Island, Fla.

Sandy requested that his final resting place be on the serene waters of Savant Lake near Sioux Lookout, Ontario, Canada, where he and his Minneapolis friends enjoyed years of camaraderie and tight lines. His request will be honored when Canada/U.S. borders are reopened to travelers.

We owe special thanks to the Carbonne Cancer Center team at University of Wisconsin Hospitals and the wonderful staff at Agrace Hospice, Madison, for dedicated and soothing care and compassion during the early weeks of the COVID pandemic. Thanks also to family and friends, whose prayers and support gentled the pain.

To plant trees in memory, please visit our Sympathy Store.
Published by Madison.com on May 30, 2021.
MEMORIAL EVENTS
No memorial events are currently scheduled.
To offer your sympathy during this difficult time, you can now have memorial trees planted in a National Forest in memory of your loved one.
Funeral services provided by:
Nitardy Funeral Home
MAKE A DONATION
MEMORIES & CONDOLENCES
Sponsored by Nitardy Funeral Home.
0 Entries
Be the first to post a memory or condolences.