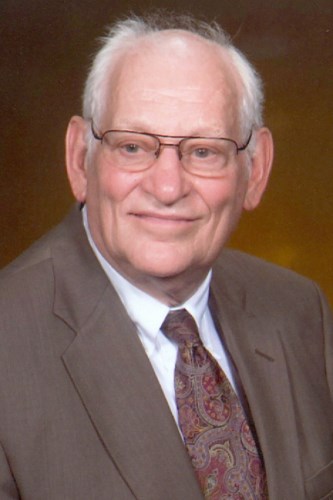 Dennis graduated from Madison High School in Madison, S.D., as valedictorian and continued his education at Wartburg College, graduating with a degree in chemistry. Dennis honorably served his country in both the U.S. Army and U.S. Air Force during the Vietnam era and was a member of American Legion Post 26 of Baraboo.

Dennis was a chemist at the University of Iowa Hospital and a brew chemist at Anheuser-Busch before joining Olin Corporation's Ammunition Division. A longtime employee of Olin, Dennis was instrumental in starting up the St. Mark's plant in Florida before transferring to the Badger Army Ammunition plant where he retired in 2003.

Dennis gave back to his community in many ways. He and Mary Kathleen purchased Reinking's Store in 1983 and operated it for many years, during which time he served as president of the Baraboo Area Chamber of Commerce. He delighted in organizing holiday parades, the lighting of the Square, and other special events. Dennis served the city of Baraboo for over four decades as both alderman and mayor and was influential in working with the county to build the West Square Building. He was past president of the Christmas Mountain Campground Association & POA and the Gollmar Moeller Ringling Tent #100. He served the Lord by taking an active role with the First Presbyterian Church of Baraboo as a parishioner and session member, and as a member of John Knox Presbytery.

Dennis looked forward to the Great Circus Parade where he spent countless hours volunteering in the wardrobe department. He was a voracious reader of World War II history and loved watching Badgers sports and Florida State football. He will be missed for his warmth, ingenuity, and compassion.

Memorial services will take place at 11 a.m. on Saturday, July 24, at FIRST PRESBYTERIAN CHURCH, 416 Ash St., Baraboo, with Pastor Lisa Newberry and Pastor Joseph Corbin officiating. Visitation will be at the church on Saturday from 10 a.m. until time of service. In lieu of flowers, please consider a donation to Circus World Museum or the First Presbyterian Church of Baraboo. Baldwin Funeral Services is assisting the family with arrangements.