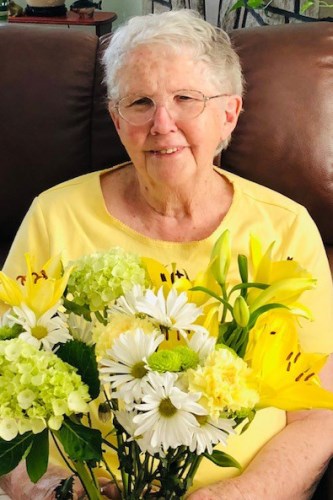 Diane was born July 15, 1930, and raised in Kenosha, Wis. After marrying Robert Newman in 1953, she moved to Madison, Wis., and started a family. Possessing a sharp mind, with excellent skills in shorthand and typing, she worked as a secretary for the city of Middleton, and later the radiology department at the University of Wisconsin. In 2006, several years after her husband's retirement, they relocated to St. Louis, Mo., to be closer to family. Despite the demands of raising three active boys and working, Diane pursued interests in art and music. She enjoyed playing the piano and sang in her church choir. Artistically she sketched and painted, and over the past decade developed an interest in watercolors, with which she remained active until the end of her life. Over the last year of her life she began teaching her granddaughter the fundamentals of watercolor painting.

Late in life Diane became a wizard on the iPad, which she used to keep up with current events and explore topics of interest. She was curious and blessed with an excellent memory, which remained intact to the time of her passing.

In lieu of flowers, memorials in Diane's name may be made to the Epiphany St. Vincent de Paul Society: https://epiphanystl.weshareonline.org/ws/opportunities/SVDP.

To plant trees in memory, please visit our Sympathy Store.
Published by Madison.com on Feb. 23, 2021.
MEMORIAL EVENTS
Feb
24
Visitation
4:00p.m. - 7:00p.m.
Hoffmeister Colonial Mortuary
6464 Chippewa Street, St. Louis, MO 63109
Feb
25
Funeral Mass
11:00a.m.
Epiphany of Our Lord Catholic Church
6596 Smiley Ave
Funeral services provided by:
Hoffmeister Colonial Mortuary
GUEST BOOK
2 Entries
I worked with Diane in Radiology and remember what a sweet and gentle soul she had. RIP Diane!
Carrie Poole
February 28, 2021
Karl,Walter and Bill, Our deepest sympathy on the loss of your mother. Your Mom and Dad were really great people. Your Dad and I worked together until his retirement and I always enjoyed his sense of ethics and a great sense of humor. When your Mom and Dad were together was a time when his sense of humor was over shadowed by your Mom´s soft spoken understated rye cutting humor. I appreciated them both greatly. They were missed here when they left our community and I know there will be an empty spot in your life now without your Mom. The memories and stories of times past will fill the void but the loss will always be just a thought away. Again our sympathies but the fond memories will always bring a smile.
Larry and Dorothy Binning
February 26, 2021