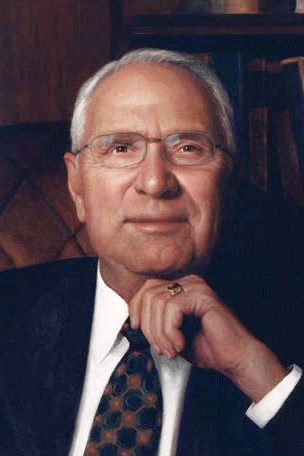 LAKE GENEVA - Donald David Hedberg died peacefully at his home in Lake Geneva on Sept. 1, 2021. Don was born on Aug. 7, 1927, in Appleton, Wis., where he grew up. His family was of little means, and his father passed when Don was 13. Don quickly became the man of the house, taking a myriad of odd jobs to help support his mother and two sisters. When Don was 17, he joined the Coast Guard, and after his service in World War II enrolled at Carthage College, earning a degree in chemistry. After graduating, he moved to Chicago, taught chemistry, and met Geraldine Raisler. They were married three short months later. After moving on from teaching and a brief stint at Proctor and Gamble in Cincinnati, Don started selling educational tools for science classrooms out of his basement in Evanston, Ill. Soon after, the family relocated to Janesville, Wis., in hopes of further expanding the business. A true entrepreneur, he saw the need for not just teaching aids but safety supplies in science classrooms and laboratories and developed the first business to business catalogue to sell industrial safety supplies; thus, Lab Safety Supply was born.

In Janesville, Don and Gerry raised three daughters, enjoyed great friends and supported the community. Don and Gerry always wanted to see their daughters involved in the family business, which became a reality when Peggy took over marketing and later the entire company. In 1992, Lab Safety was sold to W. W. Grainger, Inc.

In retirement, Don and Gerry enjoyed travel, Arizona, golf, and each other. In 1998, Gerry passed away. Soon after, Don met Marilyn Doubek, whom he married, and they enjoyed 23 wonderful years until his death. They lived in both Lake Geneva, Wis., and Manalapan, Fla., and enjoyed traveling, their dogs, and their life together.

Don was a critical thinker and strong believer in science. He had an incredibly curious mind, as well as a persistent nature that pushed him to develop new ideas for the business. A lifelong learner, he would often take his children to the Janesville Public Library in the evenings. After the company's sale, Don and Gerry donated funds for the construction of a new library in Janesville as a token of their appreciation for the community and the rewarding and enjoyable years that they spent there. Don also gave generously to UW-Madison, Carthage College, and many other philanthropic interests.

In lieu of flowers, please consider donating to the Hedberg Public Library; a link has been provided on the funeral home's website.

Derrick Funeral Home is honored to be assisting the family of Donald David Hedberg.

Published by Madison.com on Sep. 9, 2021.
To plant trees in memory, please visit the Sympathy Store.
MEMORIAL EVENTS
To offer your sympathy during this difficult time, you can now have memorial trees planted in a National Forest in memory of your loved one.
Funeral services provided by:
Derrick Funeral Home
MAKE A DONATION
MEMORIES & CONDOLENCES
Sponsored by Derrick Funeral Home.
2 Entries
You are at peace my Friend
Dolores Eddy
Friend
September 17, 2021
My sympathies to the entire family. Peggy & I were dear friends at Carthage & I´ll never forget the fun we had together! Keeping you all in my thoughts & prayers.
Lynn Von Bergen
September 10, 2021
Showing 1 - 2 of 2 results