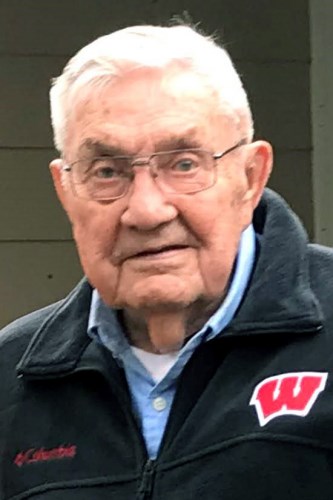 Dwayne was born Oct. 11, 1926, in La Crosse, Wis., the son of William E. and Evelyn Ledman Schmaltz, the big brother to five sisters. He attended La Crosse schools and was a graduate of La Crosse Central High School. On Oct. 11 of his senior year, he was drafted into the U.S. Army. By Christmas he was on his way to basic training at Camp Joseph T. Robinson near Little Rock, Ark. He served two years with the U.S. Army in the Pacific Theater during World War II. Dwayne attended UW-La Crosse, where he received his bachelor's degree in elementary education. On Aug. 21, 1948, he married Margaret Balmer in West Salem, Wis. He started his professional career in Middleton, Wis., teaching seventh grade and later becoming principal of Sauk Trail Elementary School. Dwayne continued his education at UW-Madison, where he received his master's degree in administration. A career move took him to Pardeeville, Wis., where he was district administrator for Pardeeville area schools from 1965-1969. In 1969 he became CESA 13/6 Administrator, moving to Waupun in 1975, and retiring in 1992. In 2006, Dwayne's wife, Margaret, passed away. On Nov. 11, 2007, he married Jane Fay in DeKalb, Ill. Dwayne was very active in the Waupun community where he was a current member of Kiwanis, Gideons, American Legion Post #210 of Waupun, and the elder board of Edgewood Community Church. Past community involvement included coordinator of the Salvation Army, member of the Waupun School Board, and a member of the board of directors for both the Christian Home and Waupun Memorial Hospital. In the various communities in which Dwayne lived, he was always active on various boards of the churches he attended. He was a founding, charter, and active member of Edgewood Community Church in Waupun. In April of 2017, escorted by his veteran grandson, Dallas, he had the privilege of attending the Old Glory Honor Flight.

In addition to a busy work life and community involvement, he was a family man, a reader, a thinker, and a doer. He was an avid gardener, a builder, and a traveler. He didn't care about the destination as much as he did the journey and the people along the way. His home was filled with singing.

A memorial service will be held Saturday, July 24, at 11 a.m. at EDGEWOOD COMMUNITY CHURCH in Waupun, with Roger Knowlton officiating.

Werner-Harmsen Funeral Home of Waupun and staff are serving the family. Please visit our website at www.wernerharmsenfuneralhome.com for further information and to send condolences.