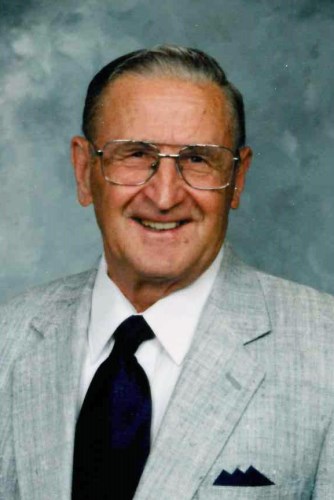 MADISON - On Oct. 9, 2021, our spunky, sassy and full of life father passed away peacefully. He was born on Nov. 7, 1929, and joked that he was the reason the Great Depression started.

When he walked into the room you would get a big hug, a joke or just his infectious smile. He was known for always wearing a t-shirt with a funny saying on it.

Earl served his country for four years in the U.S. Air Force, and when he completed his service he married Marie Genevieve Ballweg. Together they had three children.

He is survived by his children, Dale (Sally) and Judy Spahn (Kenny); and his daughter-in-law, Sherrie. His son, Gary, preceded him in death in August 2004. He was blessed with eight grandchildren, Megan (Matthew), Tiffany, Kyle (Erica), Craig, Kala (Henry), Brandon (Whitney), Derek, and Holly (Scott). He also has two beautiful great-grandchildren, Oliver and Maeve. Marie passed in July 1970, leaving Earl as a single dad. He stepped up to the plate and made sure his kids were taken care of and given all of his love. He loved spending time with his grandkids and always was the biggest kid at Christmas.

He also was preceded in death by his brothers- and sisters-in-law, Herman, John, Hank, Andy (Gerry), Tony (Marie), Josephine (Frank), Lenora (Edward), and Darlene; and a very special friend, Lawrence Schmitt. He has one surviving brother-in-law, Dick Naughton.

The family would like to extend a special thanks to Kenny and Judy Spahn and their children for having Grandpa live with them for 30 years.

The family would also like to thank the staff at Home Again for the wonderful care he received, to the nurses on 7SW at St. Mary's Hospital, and his Agrace Hospice nurse for the tender and loving care he received in his final days.

Visitation will be held at WINN-CRESS FUNERAL HOME in Waunakee on Thursday, Oct. 14 from 5 p.m. to 7 p.m. A funeral service will be held at BLESSED TRINITY CATHOLIC CHURCH in Dane on Friday, Oct. 15 at 11 a.m., with visitation from 10 a.m. until the time of service. Burial will take place in the church cemetery.

In lieu of flowers, a memorial will be determined by the family at a later date.

You will be forever missed, Dad, but you are at peace and after so many years you will be reunited with Mom and Arch. We love you.

Published by Madison.com on Oct. 13, 2021.
To plant trees in memory, please visit the Sympathy Store.
MEMORIAL EVENTS
To offer your sympathy during this difficult time, you can now have memorial trees planted in a National Forest in memory of your loved one.
Funeral services provided by:
Cress Funeral Home & Cremation Services - Waunakee
MAKE A DONATION
MEMORIES & CONDOLENCES
Sponsored by Cress Funeral Home & Cremation Services - Waunakee.
1 Entry
I am sorry for your loss he was a very funny person
Tonia Nelson
Work
October 15, 2021
Showing 1 - 1 of 1 results