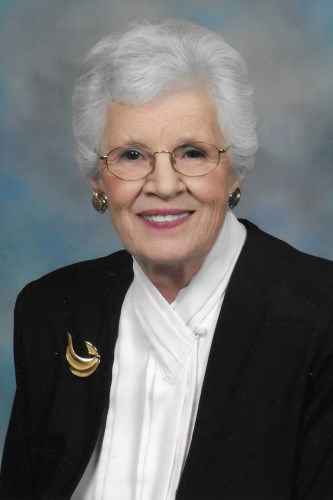 LaVon graduated valedictorian of her class at Highland High School. She continued her education at Madison Business College. LaVon worked as a secretary at Madison Kipp Factory on the east side of Madison, prior to her marriage in 1956 to Richard Vorndran. The couple lived in various places, including Milwaukee, St. Louis, Mo., and Princeton, N.J., and had four children, Kurt, Jeffrey, and twins, James and Janet.

Returning to Madison in 1976, LaVon was employed by the Department of Public Instruction as an Executive Secretary for 20 years until her retirement in 1996. She enjoyed traveling with her sisters, brothers and special friends.

LaVon was preceded in death by her son, Jeffrey, in 1986; her brothers, Robert, Patrick, Jacob and Reverend Monsignor Delbert Schmelzer; and her brothers- and sisters-in-law, Marie Schmelzer, Louis Yager, Norbert Pustina, Larry Meyer, Albert Knothe and John and Judy Vorndran. She is survived by her children, Kurt (Martin), Jim (Kathy) and Janet (Thomas); sisters, Suzette Yager and Patricia Pustina; sisters-in–law, Darlene Schmelzer, Rosemary Schmelzer and Judy Knothe; and her grandchildren, David and Nicole O'Connor (Kayla) and Beau and Caroline Vorndran. She is further survived by many nieces and nephews; and special friends, Jan Haas, Karen Dubois and Judy Riddout.

A celebration of life will be held at ST. DENNIS CATHOLIC CHURCH, Madison, April 10. Visitation will be at 10 a.m., followed by the funeral at 11 a.m. Interment will be at Roselawn Memorial Park, Monona, immediately following.