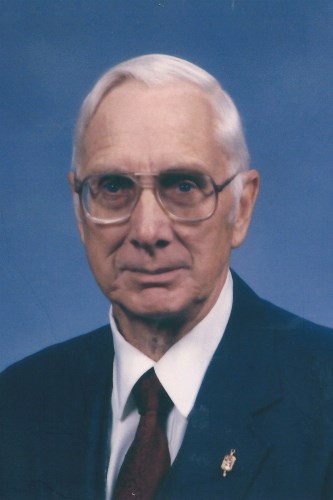 The fourth of five children, he was born Nov. 10, 1920, in the farm home of his parents, Horace and Fern (Alton) VandeBerg, in the Clark County Town of York. He attended the nearby one-room Oriole Hill School and graduated from the Neillsville High School in 1938. Gale married his high school sweetheart, Zona Raine, in 1943, shortly after receiving his B.S. Degree from UW-Madison. For the next two years he was the Dorchester, Wis., High School teacher of agriculture. In 1945 he was invited by the UW to join the Cooperative Extension Service (CES) as a UW-Extension agent for Outagamie County, with an office in the Appleton Court House. He served there as a 4-H and agricultural agent until 1954. In 1951 he was awarded one of four national Graduate Fellowships sponsored by The Ford-Ferguson Foundation. On leave, he attended Cornell University in New York, receiving his M.S. Degree in 1952. He was invited to join the Madison faculty in 1954, as the nation's first CES Training Specialist. In 1956 he was awarded a Fellowship in the newly established National Center For Advanced Study in Extension Administration, sponsored by The W.K. Kellogg Foundation. There, in January of 1957, he was granted the nation's first Ph.D. in extension administration. He was then invited to serve as a professor in that National Center. For the next five years he taught graduate courses, advised M.S. and doctoral candidates, and conducted workshops in various regions of the nation, for extension administrators. In 1962 he returned to the CES as its Assistant Director, serving in administrative positions for 21 years, until his retirement in 1983: as the Assistant State Director until 1966 when the new UW-Extension Institution was created; for four years he served there as a Dean.

In 1970 he was named as the Dean and State Director of the CES and concurrently as Assistant Chancellor of UWEX - positions held until his 1983 retirement. During his long tenure Gale was prevailed upon by the Universities of Penn State, Vermont, and West Virginia to conduct evaluations of their "Outreach Services" and to provide recommendations for their future. He taught summer schools and served as speaker at several universities, and at state and national events. He chaired Extension's National Program/Policy Committee in the late 70s. In 1980 he was commissioned, with federal funds, to guide a large prestigious national committee to do a year-long overview of the CES, and then report to The U.S. Congress. In 1983 he was elected President of the 10,000 member National Extension professional fraternity, Epsilon Sigma Phi - serving a lead role in 1984 in the establishment of the National ESP Foundation, and also The Wisconsin ESP Foundation.

Gale was also active in state and local affairs, serving as a PTA president, Sunday school teacher, president of the City of Appleton Junior Chamber Of Commerce and a VP of the State JCC. He served for several years on the Board of the Madison Methodist Hospital, was active in the Madison West Kiwanis Club, served for years as show-chair for the Badger State Dahlia Society, served several years as the Chair of the Governor's State Rural Development Committee, and served for 11 years as Chair of the State 4-H Upham Woods campsite properties and programs at Wisconsin Dells. Gale was proud of his major gift to the UW Pyle Center, where "The Gale VandeBerg Auditorium" carries his name. Among many honors received were Extension's highest "National Ruby Award" in 1978; the City of Appleton "Man Of The Year" award in 1949; and in 1979, "The USDA Superior Service Award," presented in Washington D.C.

In retirement, Gale morphed into an author and poet, publishing eight books and scores of poems. Through it all Gale remained an energetic family man, devoted to his wife of 67 years and his three children and their families, including trips to famed places in Wisconsin, throughout the U.S. and beyond. He was active with his children in 4-H county and state fair activities. He helped organize Madison's first city 4-H Club (The Diligent Doers). Gale joined his sons in developing a unique fancy-pigeon hobby, showing winning Jacobin and Fantail breeds at state and national exhibitions. He enjoyed playing the piano with his "kids," one of whom became a professional musician. Gale was an avid gardener, at one time raising 100 varieties of dahlias. After retirement he and his wife enjoyed selling their flowers and garden produce at the Farmers' Market on the Capitol Square.

A special thank you to the staff of Agrace HospiceCare for their compassionate care and support.

A family service will be held privately due to Covid restrictions. A Memorial Service is being planned for later at Madison's Bethany United Methodist Church.

To plant trees in memory, please visit our Sympathy Store.
Published by Madison.com on Nov. 22, 2020.
MEMORIAL EVENTS
No memorial events are currently scheduled.
To offer your sympathy during this difficult time, you can now have memorial trees planted in a National Forest in memory of your loved one.
Funeral services provided by:
Cress Funeral & Cremation Service
GUEST BOOK
2 Entries
Offering our deepest condolences during this difficult time.
The Staff of Cress Funeral & Cremation Service
November 22, 2020
I do not know Gale, but what a wonderful accomplished life. So many achievements to better so many lives. Rest In Peace Gale. Marshfield Resident
November 19, 2020