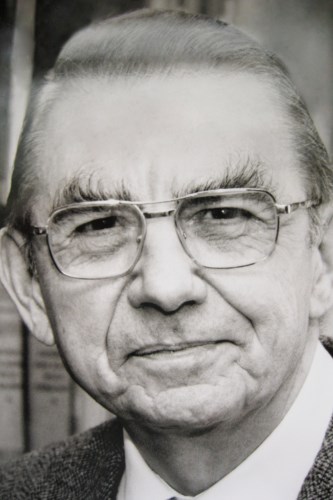 In 1949, Glenn moved to Madison to be the first graduate student in the UW History of Pharmacy Department. In 1952, he became an Associate Professor of History of Pharmacy. From 1955-1956, he was a Fulbright Scholar and Guggenheim Fellow, affording him the opportunity to study in England and Germany. Glenn retired from teaching graduate and undergraduate students in 1986. He had full and honorary memberships in several international pharmacy organizations, and he was both Founder and Director of the American Institute of the History of Pharmacy.

Glenn's passions included travel and music. He traveled to international conferences in North America, Eastern and Western Europe, and the Middle East. He equally enjoyed traveling with his family throughout North America and Europe. Glenn's family background includes a history of musical talent, as his mother had played piano in theaters showing silent movies and his brother, Don, was a professional pianist and music teacher. Glenn himself played saxophone in his high school jazz band. He became a lifelong listener of classical and big band music, and collected a library of LPs and CDs, describing himself as "a discriminating collector and audiophile." He preferred chamber music, Bach cantatas, and especially Hayden quartets. Locally, Glenn was a subscriber and supporter to the Madison Symphony Orchestra and the Memorial Union Theater concerts; he also supported local musicians.

Glenn was a member of the First Unitarian Society. He also maintained active memberships in the Social Justice Committee and the ACLU.

He was preceded in death by wife, Cleo; brother, Don Sonnedecker; and his parents.

Published by Madison.com on Jun. 27, 2021.
To plant trees in memory, please visit the Sympathy Store.
MEMORIAL EVENTS
To offer your sympathy during this difficult time, you can now have memorial trees planted in a National Forest in memory of your loved one.
Funeral services provided by:
Gunderson Funeral Home - Middleton
MAKE A DONATION
MEMORIES & CONDOLENCES
Sponsored by Gunderson Funeral Home - Middleton.
1 Entry
A graceful obituary for a generous, insightful and gentle man. His death really marks the ending of an era. My thoughts are with those who were closest to him, as you negotiate time and space in his absence.
Judi Benade
Friend
June 27, 2021
Showing 1 - 1 of 1 results