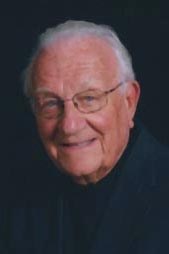 MADISON - Howard Elliott Jr., 94, a kind, humble man of great faith and integrity, passed away peacefully on July 21, 2021, surrounded by his family. Howard was born in Madison on Sept. 5, 1926, to Howard Sr. and Florence Elliott. He attended Blessed Sacrament School and was a 1944 graduate of Madison West High School where he ran track and field. In 1944, Howard was enlisted in the U.S. Navy. He trained at Great Lakes Naval Academy in North Chicago and Naval Radar Training School in Fort Lauderdale, Fla., before serving at sea on the U.S.S. Zenobia and the U.S.S. Harold J. Ellison. He was a proud World War II veteran and truly honored to serve his country. Upon discharge in 1946, he attended the University of Wisconsin and later began his 36-year career as a credit manager at Automatic Temperature Supplies, where he met many lifelong friends.

On March 31, 1951, he was united in marriage to Donna Bergmann, the love of his life. Donna and Howard shared a deep love for each other and recently celebrated their 70th wedding anniversary. In retirement, they have spent their winters in Delray Beach, Fla., and summers on Half Moon Lake in Tomahawk, Wis. Half Moon Lake became a place of many family gatherings where Howard instilled a love of the lake, boating and waterskiing in his family.

Howard's Catholic faith was unwavering and provided him a source of great comfort and strength. He was consistently positive, courageous, and never lost his sense of humor. Howard loved his Wisconsin Badgers. Watching them brought him much joy. He was honored for his service on two special occasions-first, in September of 2012, he took the Badger Honor Flight to Washington, D.C., with his daughter, Sharon, to visit the World War II Memorials. Secondly, he was honored as the Hometown Hero at half-time of a Badgers football game in September 2016 as he celebrated his 90th birthday. Other organizations he was involved with throughout the course of his life include the Knights of Columbus #531, the Elks Club, and the National Association of Credit Management.

A gathering of friends and family will be held from 5 p.m.-7 p.m. on Thursday, July 29, at the RYAN FUNERAL HOME, 5701 Odana Road, Madison. A Mass of Christian Burial will be held at 11 a.m. on Friday, July 30, at BLESSED SACRAMENT CATHOLIC CHURCH, 2116 Hollister Ave., Madison, with a visitation held one hour prior to the Mass at church. Blessed Sacrament was a special home to Howard, where he celebrated his baptism, first communion, confirmation, and marriage to Donna. Memorials may be made to Badger Honor Flight, Inc., Knights of Columbus #531, or Blessed Sacrament Parish.

A special thanks to the staffs at UW and Meriter Hospitals for their loving care of Howard during his later years of life.

Published by Madison.com on Jul. 25, 2021.
To plant trees in memory, please visit the Sympathy Store.
MEMORIAL EVENTS
Jul
29
Visitation
5:00p.m. - 7:00p.m.
Ryan Funeral Home – West Side Chapel – Madison
5701 Odana Road, Madison, WI
Jul
30
Visitation
10:00a.m. - 11:00a.m.
Blessed Sacrament Catholic Church
2121 Rowley Avenue, Madison, WI
Jul
30
Mass of Christian Burial
11:00a.m.
Blessed Sacrament Catholic Church
2121 Rowley Avenue, Madison, WI
Funeral services provided by:
Ryan Funeral Home - West Side Chapel - Madison
MAKE A DONATION
MEMORIES & CONDOLENCES
Sponsored by Ryan Funeral Home - West Side Chapel - Madison.
2 Entries
We are so sorry for your loss. Howard was a good man and he will be missed by many people. Saying prayers for you and your family during this time of sorrow.
Chuck and Jo Ann Elliott
Family
July 25, 2021
What great times were had at Half Moon Lake where Howard and Donna opened their home to entertain so many friends and family members. So many memories.... Howard at the helm towing hundreds of skiers, cocktails on the pier, card nights at that huge dining room table, and of course never to forget, catching rays on that itchy floating dock! I will never forget his easy going nature, his laugh, and his deep rooted love and devotion to God. I always admired he and Schim going to mass every morning before work. Just starting the day off right! Howard will be deeply missed by all.
Ruth Hurdle Turnquist
July 24, 2021
Showing 1 - 2 of 2 results