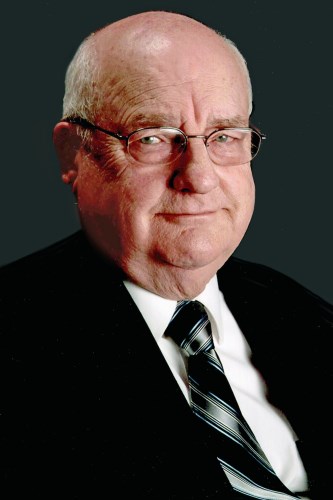 MADISON - LeRoy Lee "Roy" Flansburgh passed away Saturday, July 10, 2021, at Nazareth Health and Rehab in Stoughton, Wis., after a brief illness. Roy was born on Jan. 8, 1932, to Robert and Anna (Heller) Flansburgh. He was raised on the family farm by Bridgeport near Prairie du Chien in Crawford County, the youngest of six children.

He met his wife, Jean, in Madison in October of 1962 at Young Adult Club. By Christmas that December they were engaged, and less than a year later he married the love of his life and his angel without wings, 58 years ago, on April 20, 1963.

Roy served in the U.S. Marine Corps as a PFC on the front lines of Korea from 1952 to 1954, receiving the National Defense Service Medal, Korean Service Medal, and the United Nations Service Medal. Later in life, on Oct. 19, 2013, he was honored to participate in the Badger Honor Flight to Washington, D.C., for his service to his country. Upon his discharge he went to barber school in Eau Claire and went to work in Madison around the university prior to opening his own shop at Waubesa Street and Atwood Avenue, later moving his shop to Buckeye Road at the top of the hill, where he stayed for 17 years. His love of gardening led him to change his career, and he went to work for the state, designing and tending to the meticulous and beautiful grounds at the Wisconsin State Capitol and the state office building at 1 West Wilson. Countless people enjoyed the beautiful flowers he cared for as if they were his own. He retired in 1996 after 25 years of service to the state and people of Wisconsin.

Roy's favorite times of the year were family birthdays, holidays, or any get-together with relatives to share love, fun, and memories. He was a huge sports fan of the Wisconsin Badgers, the Green Bay Packers, the Milwaukee Brewers and the Bucks, creating a precursor to a sports bar atmosphere with multiple TVs and radios, creating one of the first man caves to keep track of and support all his teams during their seasons of loss and glory. Roy was a quiet guy but could talk for hours about sports. He loved gardening, took pride in his yard and garden, and even the smallest plant benefited from his care. Roy was a real handyman and could fix or repair almost everything. He also enjoyed putting puzzles together, trivia questions, and bingo at Nazareth. For his 58th wedding anniversary, he gave his wife a present of 35 cents he won in bingo, since he couldn't leave the care center during quarantine.

A funeral service will be held at OUR SAVIOUR'S LUTHERAN CHURCH, 1201 Droster Road, Madison, at 11 a.m. on Saturday, July 17, 2021, with the Rev. Cory Hahnke presiding. A potluck luncheon will follow the service. Visitation will be held at the church from 9 a.m. until the time of the service on Saturday. Online condolences may be made at www.gundersonfh.com.

To plant trees in memory, please visit our Sympathy Store.
Published by Madison.com on Jul. 14, 2021.
MEMORIAL EVENTS
Jul
17
Visitation
9:00a.m.
OUR SAVIOUR'S LUTHERAN CHURCH
1201 Droster Road, Madison, WI
Jul
17
Funeral service
11:00a.m.
OUR SAVIOUR'S LUTHERAN CHURCH
1201 Droster Road, Madison, WI
Funeral services provided by:
Gunderson Funeral Home - Madison
MAKE A DONATION
MEMORIES & CONDOLENCES
Sponsored by Gunderson Funeral Home - Madison.
2 Entries
Dear Jean and family, Roy's obit is a beautiful tribute to a truly "good guy". Jean, it sounds like your life together was one of many blessings. May your CHS classmates continue to be a source of joy in your life and may those friendships bring you comfort at this special time of life. Sincerely, Ross and Lucy
Ross Parisi
July 17, 2021
Aunt Jean and LeAnn, so sorry to hear about Uncle LeRoy. Sending caring thoughts and love to you.
Debbie Flansburgh Gay
Family
July 14, 2021
Showing 1 - 2 of 2 results