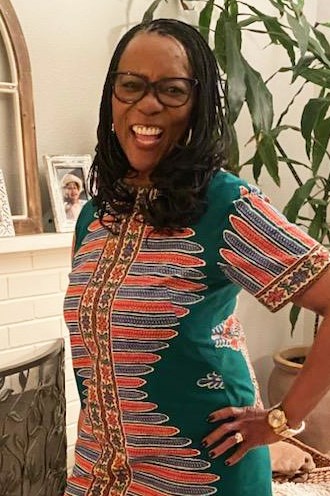 NOVATO, Calif. - Liziwe "Lizzie" Boitumelo Kunene Pointer passed away Friday morning, Oct. 22, 2021, at 2 a.m. Lizzie-as she was called by her loving husband, Fritz Pointer-was born in Cape Town, South Africa, on Oct. 8, 1956. She was an educator, artist, and dancer, whose life and service included expanding opportunities for young people to develop their skills and talents in the arts. She enjoyed travel, meeting new people, and giving generously of herself.

She spent the early years of her life growing up under apartheid rule in South Africa. In 1963, due to the intolerable apartheid system, her father, Dr. Daniel Pule Kunene, a professor, author, and translator of African languages and literature, along with her mother, Selina, a registered nurse, moved Lizzie and her brother, Sipho, to the United States.

The family spent a brief stay in London, England, and after relocated to Los Angeles, Calif., where Professor Kunene began a professorship at the University of California, Los Angeles (UCLA). While in Los Angeles, Lizzie's brothers, Luyanda and Wandile, were born. In 1970, Professor Kunene accepted a teaching position at the University of Wisconsin and the Kunenes relocated to Madison, Wis., where Professor Kunene began a 33-year career in the department of African languages and literature, which would also become the department where Lizzie further developed her passion for art and dance, which emerged in childhood.

Lizzie attended the University of Wisconsin, receiving her Bachelor of Science in Fine Arts and becoming the first student to earn a master's degree in African American art history, under the guidance and watchful of eye of Dr. Freida High Tesfagiorgis. Following her matriculation, in 1977, she married Fritz Pointer and they moved to Decorah, Iowa, where she worked as a student advisor and counselor. She devoted her professional career to academic administration, promoting and expanding opportunities in the arts.

In 1984, with their children, Somori and Thiyane, Lizzie and Fritz moved to Novato, Calif. Lizzie worked as dean of students at California College of the Arts in Oakland, Calif., for 20 years. After retirement, she and her husband enjoyed international travel. One of the most touching experiences in her life was her parents returning to South Africa in 1993 after the fall of apartheid and shortly before her mother's passing. Later, in 2013, she would return to South Africa with her family as her father, Dr. Daniel Kunene, was bestowed an honorary degree by the University of Cape Town.

Lizzie was 65 years old at the time of her passing. She is survived by her husband of 44 years, Professor Fritz Pointer; two beautiful sons, Somori and Thiyane and their wives, Tracy and Jackie, respectively; two stepchildren, Shegun and Nandi; and six grandchildren, Jadah, Len (aka Selina), Phoenix, Amaru, Daniel, and Kendrick.

She is also survived by three brothers, Sipho Kunene (New York), Luyanda Kunene and his wife, Linda Fowells (Los Angeles), and Wandile Kunene (Los Angeles); and a plethora of aunts, uncles, cousins in South Africa, and many friends in the United States who loved her. Liziwe did not have biological sisters and counted the Pointer sisters among her own. Her family was her life.

Lizzie will be interred at Mount Tamalpais Cemetery in San Rafael, Calif.

Published by Madison.com on Oct. 31, 2021.
To plant trees in memory, please visit the Sympathy Store.
MEMORIAL EVENTS
To offer your sympathy during this difficult time, you can now have memorial trees planted in a National Forest in memory of your loved one.
MAKE A DONATION
MEMORIES & CONDOLENCES
4 Entries
I will never forget Liz, although I only got to know her personally for about 20 minutes in Hamburg at the central station, together with Fritz. I immediately liked her! May she rest in peace.
Friederike von Fisenne
Other
November 4, 2021
I am deeply grateful for the time I spent with Liz at CCA. She was a special lady and a terrific boss to me. One of the things I loved the most about her was her capacity for empathy, and the many ways she served the needs of the art students. Her heart was huge, and I loved her.
Tara Rech
November 3, 2021
Liz was a smart empathetic and passionate person who loved her family very much. I was shocked to hear of her passing and send my heart-felt sympathy to Fritz and his kids, grandkids and friends. If ever there is anything I can do for you Fritz, you need only ask.
Dawn Scribner
Other
November 2, 2021
Fritz and all the of Lizzie's family we are too just shocked and saddened at her loss. She will be greatly missed. I don't know if you know this but she sent be birthday wishes three days before my birthday and hours before she passed. Always thinking of others! I was touched to get the message and so saddened when Shane called us to tell us what happened.
Maureen Whitmore
Friend
November 1, 2021
Showing 1 - 4 of 4 results