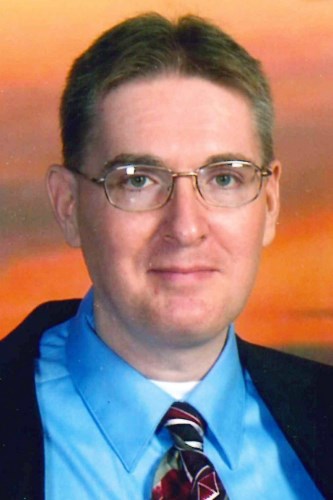 Mark graduated in 1993 from Illinois Wesleyan in Bloomington, Ill., and later attended graduate school at University of Nebraska in Lincoln. Mark worked as a software engineer for Forte Research (Advarra) for over 15 years.

Mark's hobbies included piano, classical guitar, foreign languages, ballroom dancing and participating in many charity runs. Mark's family was his priority; he was a devoted husband and father.

He will be deeply missed by his wife, Jasmin; son, Malcolm Terence, 21; daughter, Amber Mae, 16; and one sister, Debra (Todd) Harder of Jacksonville, Ill.

A celebration of life gathering will be held from 3 p.m.-6 p.m. on Thursday, June 17 at the CRESS CENTER, 6021 University Ave., Madison. A graveside service will be held at 11 a.m. on June 19 at MEMORIAL LAWN CEMETERY in Jacksonville, Ill.

In lieu of flowers, donations may be made to the American Cancer Society, 725 Heartland Trail, Unit 301, Madison, WI 53717 or the Madison Classical Guitar Society.

Published by Madison.com on Jun. 13, 2021.
To plant trees in memory, please visit the Sympathy Store.
MEMORIAL EVENTS
Jun
17
Celebration of Life
3:00p.m. - 6:00p.m.
Cress Center
6021 University Avenue, Madison, WI
Jun
19
Graveside service
11:00a.m.
Memorial Lawn Cemetery
Jacksonville, IL
Funeral services provided by:
Cress Funeral & Cremation Service - University Chapel
MAKE A DONATION
Please consider a donation as requested by the family.
MEMORIES & CONDOLENCES
Sponsored by Cress Funeral & Cremation Service - University Chapel.
4 Entries
Deepest sympathy to Mark’s family. I have many fond memories of Mark growing up in Franklin and at college in Bloomington. I remember hunting for dinosaur bones during recess in elementary school with Mark, and staying inside during recess in 5th or 6th grade in Mrs. Kitchen’s class and building a castle with empty oatmeal containers with him. I also enjoyed his dry wit and recall throwing an eraser at him during a study session in college for some comment he had made.
Diane Roegge
Classmate
June 14, 2021
My deepest sympathy to Mark's family. I babysat for Mark and Debbie when they were very young, in 1976/77. They lived around the corner from my parents, Ted and Jean Stewart in Franklin. They were both such sweet kids. I have fond memories of Mark and Debbie. Prayers of comfort for Debbie and Mark's families.
Julie (Stewart)Luke
Friend
June 13, 2021
My sympathies to the family. I grew up going to school with Mark in Franklin and have fond memories of him.
Becky Carter Naccarato
Friend
June 12, 2021
To the entire Gibson family, my deepest sympathy. I remember Mark as a child in Illinois, my father was his dads first cousin, our grandmother’s were sisters.
Bonny Brogdon Moran
Family
June 10, 2021
Showing 1 - 4 of 4 results