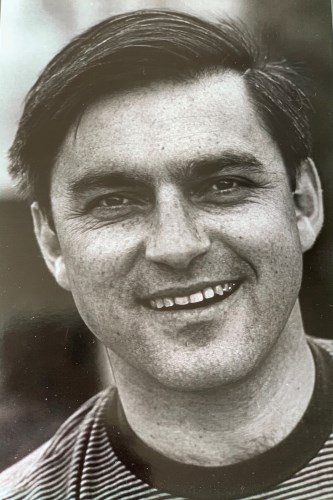 MADISON - Michael Voichick, of Madison, died peacefully on Thursday, July 1, 2021, surrounded by family in a room full of love. Mike was born to Herman and Stella Voichick in Yonkers, N.Y., on May 28, 1934. He and his older sister, Barbara, led happy childhoods, primarily in Philadelphia where his parents ran a Harley Davidson dealership, and Mike was no doubt one of the friendliest and funniest kids on the block.

As a teen, Mike spent summers in the Catskill Mountains at Camp Woodland. It can be difficult to identify moments in our lives where our enduring passions and values take root, but Camp Woodland was such a place for Mike. Known for helping spawn the American folk music movement and governed by the slogan, "The world is a neighborhood, one family with one future," the multiracial camp that brought city kids to the country to develop an appreciation for Catskills culture and blended community fostered both Mike's openness to people of all kinds from all places and his deep appreciation of music, especially folk, jazz and classical. (With a twinkle in his eye, Mike loved to remind people that he too was an accomplished musician...after all, he had mastered the triangle in his third-grade band.)

Mike attended Oberlin College and, soon after, met his future wife, Jane, at a party. Jane was knitting a sweater for another suitor at the time, but sparks flew and Mike ended up with both the sweater and the girl. After marrying in December 1960, Mike and Jane worked fast: three years, three states, three kids. In 1962, Mike received his Ph.D. in mathematics at Brown University and Jennifer was born; in 1963, during Mike's postdoc at Dartmouth, Nicholas was born; and in 1964, they landed in Madison where Mike joined the math faculty at University of Wisconsin, Jonathan was born, and they settled in and made their family home.

Mike loved teaching college math, and his students loved him back. For more than three decades, he brought his sharp intellect and keen sense of humor into the classroom, and it was appreciated by his students and many advisees. In spite of the demands of academia, Mike always found time to support Jane's professional ambitions and share in the parenting responsibilities, including carting three hockey-playing kids to endless games and practices at the crack of dawn in sub-zero temperatures. "Papa Mike" was also a devoted grandfather, and his grandsons appreciated his good humor, playful nature, and on-the-spot math quizzes.

All of us who knew Mike will remember his wide smile, easy laugh, kind heart, and generosity of spirit. More than anything, he valued human connection. He made friends wherever he went, and he always approached other people with genuine interest and curiosity. His openness, warmth, and jollity brightened our every day. In the autobiography he penned at age 15, entitled "Mike's Maneuvers," Mike wrote, "I, Michael Voichick, resolve to strive to be an asset and benefit to the world to the end of my days." Hey, Mike! You nailed it.... and we miss you so much already.

Preceding Mike in death are his parents and his sister, Barbara Kulicke. Mike leaves behind his beloved and devoted wife of 60 years, Jane Voichick; his three children, Jennifer, Nicholas and Jonathan Voichick; his four grandsons, Finn, Lucas, Walker, and Owen Voichick; his daughter-in-law, Leslie Shown; granddaughter-in-law, Abigail Voichick; and many deeply loved cousins, in-laws, and friends. If you would like to make a donation in Mike's memory, please consider the Wisconsin Alzheimer's Disease Research Center, Capitol Lakes Foundation, or Agrace HospiceCare.

Published by Madison.com on Jul. 4, 2021.
To plant trees in memory, please visit the Sympathy Store.
MEMORIAL EVENTS
To offer your sympathy during this difficult time, you can now have memorial trees planted in a National Forest in memory of your loved one.
Funeral services provided by:
Cress Funeral & Cremation Service - Madison West
MAKE A DONATION
MEMORIES & CONDOLENCES
Sponsored by Cress Funeral & Cremation Service - Madison West.
4 Entries
Dear Jane, Jenn, Nick, Jon, and the whole Voichick family, we share your sadness at Mike's passing and are so sorry for your loss. This obituary is a wonderful tribute to a man who brought so much joy into the world. May your fond memories of him help you through this difficult time.
Mark & Lori DuRussel
Friend
July 5, 2021
Dear Jane, I am so very sorry to hear that Michael is no longer with you and your family. You have my sincere condolences. I
Audrey N. MaretzkiI
July 5, 2021
I have fond memories of the year Michael and I roomed toether at Brown. My deepest sympathy to you and your family. I was glad to have spoken to Mike a few years ago after I missed you on my visit to Madison to see Herb Lewis. Martin Zuckerman
Jane
Friend
July 4, 2021
Offering our deepest condolences during this difficult time.
The Staff of Cress Funeral & Cremation Service
July 4, 2021
Showing 1 - 4 of 4 results