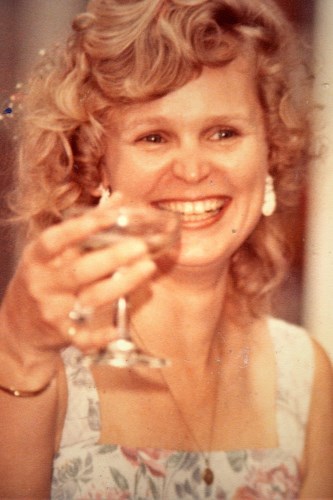 SUN PRAIRIE - A force of nature, a teller of stories, champion of underdogs, a woman who cared. Historian, genealogist, keeper of family secrets, seeker of justice. Nancy Chase McMahon was born on Sept. 11, 1938, to Theodore and Marcella Dolan Chase in Sun Prairie, Wis., and left this world suddenly on Jan. 23, 2021. Nancy was the third of six children, and part of the fifth generation to be born in Sun Prairie. She cared deeply about Sun Prairie history and was proud to be of service to the community.

Nancy married her partner in life, John "Jack" McMahon, on June 1, 1957, at the tender age of 18. Together they raised four children, Patrick, Amanda, Michelle, and Daniel, as well as taking several others into their hearts and home, including Mary Walker, Carol Knechtges Johnson, and Greg Knechtges. She gave them all magic and adventures.

From raising children, Nancy ventured into being an advocate for public television. She was a founding member of "Friends for Channel 21," consulted on children's television programs including "Carrascolendas," "Freestyle," and "Checking It Out," all of which aired nationally on public television. She was chairperson of ACNO (Associated Counsels of National Organizations) which was the advisory board for CPB (Corporation for Public Broadcasting), testified before congressional committees and lobbied for more funding for children's broadcasting. She was one of the first female lobbyists in Wisconsin. One of her greatest accomplishments was the groundbreaking establishment of KIDS4, a first in the world local television station run for and by kids that achieved national acclaim. In 1981 she purchased WMAD FM and put WERU AM (later WMAD AM) on the air. After her radio career, Nancy served as Development Director for Edgewood College. She was deeply committed to saving the Crosse House and Sun Prairie history, including being actively involved in the 20th Century Club. Nancy was a long-standing member of TEMPO Madison, an organization dedicated to women leaders with diverse backgrounds. When once asked how to describe herself, she said "If tenacity is one of my virtues, then stubbornness may be one of my faults."

In later years, she was proud to be called "Nanny" by her grandchildren and devoted much of her time to caring for Jack. She loved spending time at their lake property in Northern Wisconsin that she considered her own piece of heaven.

A Mass of Christian Burial will be held at ST. ALBERT THE GREAT CATHOLIC CHURCH, 2420 St. Albert the Great Drive, Sun Prairie, on Monday, Feb. 1 at 11 a.m. with Monsignor Donn Heiar presiding. A private visitation will be held from 10 a.m. until the time of Mass. Interment will follow immediately at Sacred Hearts Cemetery.

In lieu of flowers, please make donations to the or Sacred Hearts Endowment Fund (https://shjms.org/endowment-fund) or Crosse House ( http://www.crossehouse.com/make-a-donation-become-a-member-or-volunteer.html).