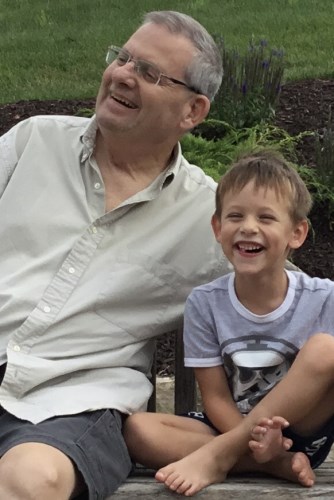 MADISON - Philip Michael Schumacher, age 70, passed away on Dec. 27, 2020, after a decades-plus battle with multiple myeloma.

Phil was born and raised in Madison. He attended St. Bernard's Grade School, Madison Edgewood High School, and graduated from Madison East High School in 1968. After his first three semesters at the University of Wisconsin-Madison (UW), he joined the U.S. Air Force.

While in the Air Force, he married the truly one and only love of his life, Linda Hilton, and together they had their first child, Philip John. When Phil's service was complete, the family moved back to Madison, where Phil joined Oscar Mayer, the beginning of a 34-year career with Oscar Mayer and its parent and affiliated companies.

Phil completed a B.A. in sociology and a M.S. in industrial relations at the UW in 1975 and 1977. He and Linda welcomed their second and third children during that time, Lauri (Rollings) and Christopher.

In 1981 the family moved to Iowa, where they spent seven years at two locations of Oscar Mayer. They returned to Madison in 1988 where Phil was the Corporate Labor Relations Manager and later the Assistant Director of Management and Organizational Development. In 1994, Phil, Linda, and Chris moved to Connecticut as Phil joined General Foods in White Plains, N.Y., to collaborate on the strategy and execution of combining the sales forces Oscar Mayer, General Foods, and Kraft. Assignment completed, Phil returned to Madison as Corporate Director of Human Resources for Oscar Mayer.

Phil was a member of the board of directors for AIESEC (international student association) and later joined SCORE.

After retirement Phil taught for seven years as a lecturer at the UW School of Business, Madison College, and Phoenix University (Madison campus).

Phil's passions were family, reading, and travel. In 2013 with great joy he became the beloved "Baba" to his only grandchild, Sam, who quickly became one of Phil's best friends. With Kraft, Phil did business in 60 countries on six continents. He and Linda vacationed in Russia, Turkey, and Croatia, among many other countries. After retirement he and Linda set out to complete visits to all 50 states. In 2019, with a trip to Alaska, they accomplished that goal.

Phil was preceded in death by his son, Philip John; his parents, Ken and Regina; his brothers, Peter and Eugene; and his sister, Jane. He is survived by the love of his life and wife of 50 years, Linda; his daughter, Lauri (Joel) Rollings; his son, Christopher (Bridget Miliacca); his grandson, Sam Rollings; his sister, Katy (David) Dycus; his brothers, Danny and Greg; his sister, Mary; his sister-in-law, Debra Heaney; brother-in-law, Bob (Jodi) Hilton; and numerous nieces, nephews, and friends.

"Good night sweet prince; And flights of angels sing thee to thy rest." A Mass of Christian worship will be held when Covid restrictions allow.

Phil and Linda would like to thank the staff at the UW Carbone Cancer Clinic and the Cancer Center at Froedert and the Medical College of Wisconsin in Milwaukee, especially Doctors Natalie Callander and Walter Longo.

In lieu of flowers please contribute in Phil's name to the Carbone Cancer Center at the UW Hospitals and Clinics in Madison. You can do that at https://www.classy.org/fundraiser/3087538.

If you would like to mail in a check, please send it to:

To plant trees in memory, please visit our Sympathy Store.
Published by Madison.com on Jan. 3, 2021.
MEMORIAL EVENTS
No memorial events are currently scheduled.
To offer your sympathy during this difficult time, you can now have memorial trees planted in a National Forest in memory of your loved one.
Funeral services provided by:
Ryan Funeral Home - Verona Chapel
GUEST BOOK
0 Entries
Be the first to post a memory or condolences.