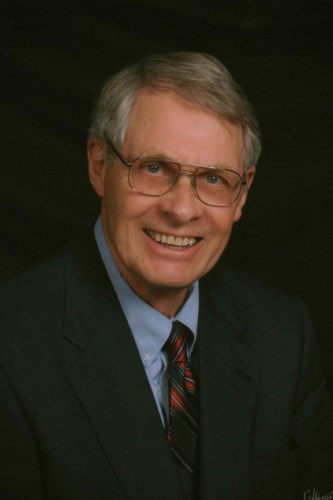 He attended Lake Forest Academy and received a bachelor's degree in journalism from the University of Wisconsin in 1954. His four years at the University were enhanced and enriched by his affiliation with Sigma Phi Society and through his position as Editor of the 1954 Badger Yearbook, which received All American Recognition from the Associated Collegiate Press. It was the defining experience of his years at the University. The responsibility of Editor consumed one academic year, including one summer school. At the Badger office, he met Nancy Emmons, a member of the staff and his future wife. They married on Sept. 10, 1955. The position of Editor led to a career in book manufacturing and printing, first with Brock and Rankin in Chicago and subsequently with Webcrafters Inc., in Madison, where he was employed for over thirty years, retiring in 1993. His relationship with Sigma Phi continued during the years after graduation, and the friendships made during his days as an undergraduate have endured. He contributed as a member of the local Sigma Phi alumni corporation, serving as Treasurer and President. He represented the Wisconsin Chapter on the Society's Standing and Advisory Committee, and was the National Secretary of the Society from 1970 to 1982.

Retirement was well worth the wait. He enjoyed relaxing at their condo in Door County, looked forward to the occasional trips to New Mexico, and always anticipated the annual fishing and tennis trip to Vilas County with close friends, Lowell Froker and Roger Reinke. Memorable vacations over the years at a ranch in Montana with dear friends were truly special. Time with his family was greatly anticipated and always cherished.

He was a member of Asbury United Methodist Church, Blackhawk Country Club, and the Bascom Hill Society. He was an avid Green Bay Packers and Wisconsin Badgers fan.

He is survived by his wife, Nancy; daughter, Connie Johnson of Excelsior, Minn.; and three grandchildren.

He will be buried in Forest Hill Cemetery. In accordance with his wishes, no memorial will be held. Donations may be made in Roland's name to the Attic Angel Association or a charity of your choice. Please share your memories at www.cressfuneralservice.com.

To plant trees in memory, please visit our Sympathy Store.
Published by Madison.com on Nov. 22, 2020.
MEMORIAL EVENTS
No memorial events are currently scheduled.
To offer your sympathy during this difficult time, you can now have memorial trees planted in a National Forest in memory of your loved one.
Funeral services provided by:
Cress Funeral & Cremation Service
GUEST BOOK
1 Entry
Offering our deepest condolences during this difficult time.
The Staff of Cress Funeral & Cremation Service
November 22, 2020