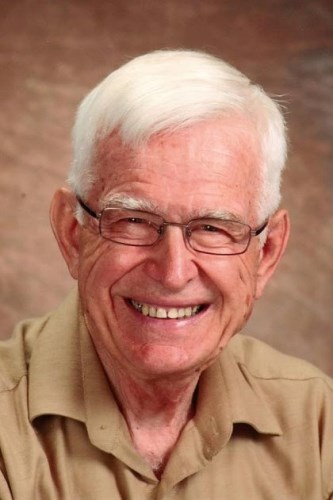 PORTAGE – Stanley Charles "Stan" Walz, age 95, went home to his Heavenly Father on Saturday, Nov. 7, 2020. He was born on June 28, 1925, to the late Irl Raymond Walz and Vera Miranda (Dunlevy) Walz, in Galesburg, Ill. He grew up a farm kid near Norwalk, Wis. Norwalk always remained so dear to him, wherever he lived throughout his long life. He developed his love of family, friends, church, country, nature, and conservation from his experiences in this corner of the Kickapoo Valley in the Driftless Region.

He graduated from Norwalk High School in 1943 and bachelor farmed for six years before beginning college at North Central College in Naperville, Ill. He graduated from University of Wisconsin at Platteville, Wis., with a degree in agricultural education and a minor in biology, in 1954. He received his Master of Science in 1970 from the University of Wisconsin–Platteville.

It was while working on his undergraduate degree at Platteville that Stan met Marilynn Ann Steffens. After graduation he accepted a teaching position at Kamehameha Schools in the territory of Hawaii, and they continued their courtship via air mail letters. They were united in marriage on June 10, 1955, at the Central Union Church in Honolulu. After returning stateside he worked for three years as a Student Recruiter for North Central College in Naperville, Ill. In 1962 he took a middle school science position in the Monona Grove School District (first teaching at Nichols, and then at Winnequah when it opened in 1963). Stan taught 7th grade general and life science until his retirement in 1990. He loved his career at Monona Grove, fondly speaking of the leadership and teamwork that he experienced with the staff, and the great enjoyment the students brought him for almost three decades.

Stan was a founding member of the Divine Savior United Methodist Church (now Wellspring) in Madison. Stan and the family were involved with church fellowship, camping, and the Model A Restorers Club. In 1979 Stan and Lynn purchased the Cascade Mountain Road Motel in Portage. When Stan retired in 1990, they sold the motel and began many busy adventures. They were active members of the Model A Restorers Club, National Mustang Club of America, and the Badgerland Antique Auto Club. They belonged to several genealogy groups across the state. They enjoyed traveling across the country (visiting family and friends all along the way), and a return to Hawaii in 2002. They celebrated their 50th Anniversary in 2005. Lynn passed away in 2006 after a brief illness. Stan turned to writing after her passing, in addition to remaining active in the many groups and clubs. He wrote to ease his grief and joined the Unique Singles group in Portage to navigate this new stage of life. He published a book on family history in 2016. He continued working on two additional books about his dealings with grief and his teaching career.

The family would like to thank all those who have helped support the family during this difficult time. Your well wishes, prayers, and cards were very appreciated. We would especially like to thank Doctor Jill Pogorelec, the team at Tivoli at Divine Savior, and the Agrace Hospice team.

In lieu of flowers, the family suggests memorials may be made to the Portage United Methodist Church, Agrace, or Norwalk United Methodist Church. Meeting the end of the story during a pandemic has greatly altered our normal grieving process. A graveside service will be held on Thursday, Nov. 12, 2020, at Wanderers Rest Cemetery in Norwalk, Wis.

The Pflanz Mantey Mendrala Funeral Home in Portage (www.pmmfh.com) is assisting the family.

To plant trees in memory, please visit our Sympathy Store.
Published by Madison.com on Nov. 15, 2020.
MEMORIAL EVENTS
Nov
12
Graveside service
Wanderers Rest Cemetery
, Norwalk, Wisconsin
Funeral services provided by:
Pflanz Mantey Mendrala Funeral Home
GUEST BOOK
7 Entries
My deepest sympathies to Mr. Walz´s family. I was fortunate enough to have this dear, kind man as a science teacher in the 70´s at Winnequah Middle School. I´m certain my great teachers helped to inspire me to enter the field of education. This is my 31st year.
Karen Sturdevant
November 27, 2020
Dear Janna, (and family) I´m so sorry for your loss! I was very sad to hear of your dads passing! I just found out about it or you would have heard from me sooner. Things are so crazy now as you know! A few thoughts as I look back. I did not get to know your parents until I think around 2005 after retiring from UPS. From that time, I became his computer repair man and was at his house about 30 times over the past 15 years! I really enjoyed all the times and conversations we had over that time. He spoke very highly of all his children, grandchildren and great grandchildren! We had many conversations about his genealogy, the book he was writing, hometown experiences, antique cars and so much more. Your dad was the kind of guy that you would want to be around! So full of historical information! Sadly, we are losing a lot of that as older people pass on. One thing that was amazing to me is that as time went on and his sight and hearing was failing, his mind was very sharp! I could talk to him about anything and he knew what was going on! It has been a great blessing to have a friendship with him! Your dad so much more than just a customer! He will be greatly missed!
Mark Higgins
November 18, 2020
So sorry to hear of Stan´s passing. I enjoyed receiving Christmas cards from him over the years. He was a special person.
Sue Widen
November 12, 2020
Janna, my condolences to you and your family on the loss of your dad.
Clark Hodgson
November 12, 2020
His story´s were always interesting to listen to. I too enjoyed the hugs from Stan. He was always smiling which made you smile too. He will be missed. Rest In Peace
Letty
November 12, 2020
I always looked forward to hugs from Stan. They were the best! He had a way about him of making a person feel good. Be at peace, Stan.
Sarah
November 11, 2020
Taught with Stan for 20 years. One of the kindest and most patient guy I've ever known. Rest in Peace, Stan.
David Czerepinski
November 11, 2020