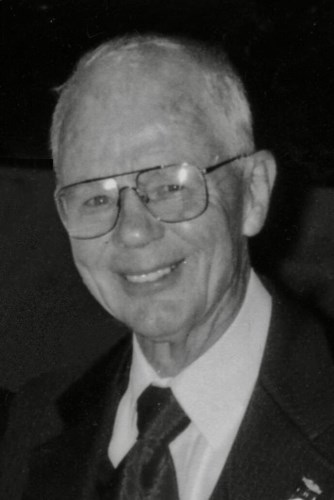 Bill graduated from East High School in Madison, Wis., in 1948. He then enlisted in the U.S. Army from 1948 to 1952. He specifically served in the Korean War from 1951 to 1952, with the 7th Infantry Regiment, 3rd Infantry Division. He was a recipient of the Bronze Star.

He returned home and married Joan Elaine Lunde on Aug. 22, 1953. He and his wife moved to California in 1958, where Bill worked for the Los Angeles Sheriff's Department from 1958 until 1986, retiring as a lieutenant. He and his wife then moved to Pismo Beach, Calif.

Bill was very active in local Republican politics, and he will long be remembered for registering voters for 12 years at the San Luis Obispo Farmer's Market. He and his wife also served on the Central Committee for several years for the Republican Party for San Luis Obispo County. He was very gifted mechanically and could fix anything. He also enjoyed racing his 1969 BMW 2002 Special, and he had wonderful memories of his time with the BMW Car Club of America.

Bill is survived by son, Scott Rosensteel of San Luis Obispo, Calif.; daughters, Rynner Mann (John) of Newport Beach, Calif., and Gayle Rogers (Tom) of Chino Hills, Calif.; and five grandchildren, Anya (Bill) Swearigan and Roxanne Rosensteel, as well as by Anneliese, Shane, and Kaylie Rogers. He is also survived by his sister-in-law, Millie (Lunde) Davis of Wisconsin; as well as by many nieces and nephews.

He was preceded in death by his wife, Joan (Lunde) Rosensteel; brother-in-law, Al Lunde and sister-in-law, Eleanor (Lunde) Ackley of Wisconsin; as well as by sister-in-law, Lori (Lunde) Howard of Arizona. A private family graveside will be officiated by his son-in-law, Pastor John Mann, later this month.

Published by Madison.com on Sep. 18, 2021.
To plant trees in memory, please visit the Sympathy Store.
MEMORIAL EVENTS
To offer your sympathy during this difficult time, you can now have memorial trees planted in a National Forest in memory of your loved one.
MAKE A DONATION
MEMORIES & CONDOLENCES
0 Entries
Be the first to post a memory or condolences.