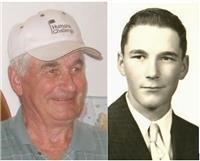 Wendell Darrell Kirkpatrick was born April 24, 1939 to Ennis Hyrum and Eda Mae Seehorn Kirkpatrick in Paul, Idaho. He was the middle child joining Neal and Elaine and later Melvin and Galen.

He graduated from Jerome High School in 1957, in a small class that has kept close. He always looked forward to each 5 year class reunion. He played and enjoyed sports. He served in the US Army Reserve as he had a deep love for his country. After high school, he attended college in Boise while it was a Jr College. He is very proud to be a Boise State Fan to this day!

In his younger days, he farmed and ranched and especially liked it when he was working alongside his older brother, Neal. His younger brother, Melvin was living in Alaska so "off to Alaska" the young family went. He enjoyed Alaska and thought it was a great place to raise his sons, Brad, Kelly and Ryan. He also took up the game of golf; which became his lifelong passion. He achieved a "Hole in One" his last day to golf in Mesquite, when he was 80 years old. He never had the health to golf again.

In 1986, they returned to the Las Vegas area. Wendell went to work at the prison in Indian Springs, Nevada as a correctional officer. In 1991, married Caro Lynn and became stepfather to her brood of 1 daughter and 4 sons. Then in 1998, he wanted to return to Idaho. A small acreage was bought and they built our dream home in Buhl, Idaho with his second home just 4 miles away, the Clear Springs Golf Club! Talk about a "Happy Camper" that was Wendell! He renewed friendships with Gary Bonar and Larry Shark, who he played sports against in high school and reconnected in college at Boise. Week days he would be up early and head to the golf course to see his buddies. They golfed mostly, but if for some reason they couldn't, they would play cards, some days they did both. He would come home and work on his second love, his yard and garden. He liked having cattle in the pasture in the spring. Life was good with friends to have dinner with, golf, etc. neighbors that challenged us at Dominos, friends who traveled to visit and play cards with for several days! The Rainbow Classic was an annual golf event his longtime friend, Terry Ketner, would come from back east to play.

Wendell has lots of cousins, nieces, and nephews in the area so there were many family gatherings. And, of course the family visiting from out of state was a special treat. Wendell loved it all. In 2018, health issues persuaded him to move closer to family, so we relocated in to Mesquite, Nevada. Health continued to decline and he passed away at home in the evening of October 14, 2020.

Services will be held Saturday, October 24, 2020 at the Paul Cemetery in Paul, Idaho. Viewing will be at 10 am. Services to follow at 11am in the chapel at the Paul Cemetery. Interment will follow. In lieu of flowers, Kirk would appreciate donations in his name to one of his favorite charities, St. Jude Children's Foundation. The family invites you to leave a message or memory in their Guest Book at www.virginvalleymortuary.com.

To plant trees in memory, please visit our Sympathy Store.
Published by Magic Valley Times-News on Oct. 22, 2020.
MEMORIAL EVENTS
Oct
24
Viewing
10:00a.m. - 11:00a.m.
Paul Cemetery
89027
Oct
24
Service
11:00a.m.
chapel at the Paul Cemetery
, Paul, Nevada 89027
Funeral services provided by:
Virgin Valley Mortuary - Mesquite
GUEST BOOK
3 Entries
Our prayers go out for Carol Lynn and your family. Enjoyed golfing with Wendell his years at Clear Lake CC .... sewing with Carol Lynn and the friendship created. A good man, will be missed. RIP in peace, my friend.
Ralph& Nova Hatch
October 24, 2020
I really enjoyed spending time with Uncle Wendell. He was the only person I ever enjoyed golfing with. I was excited every time he would come see us at rodeo camp in Fyler or at our home in Nevada with Caro Lynn and Scooter. I have great memories playing at the house in Idaho. He will be greatly missed.
Austen Vaughan
October 22, 2020
I send my sincere condolences to you, Carol Lynn, and your family. Wendell was a such a fun loving classmate of mine, We all will miss him, but will remember all the good times we had with him. Take care, Class of "57" classmate, Anna
Anna J Leonard
October 22, 2020