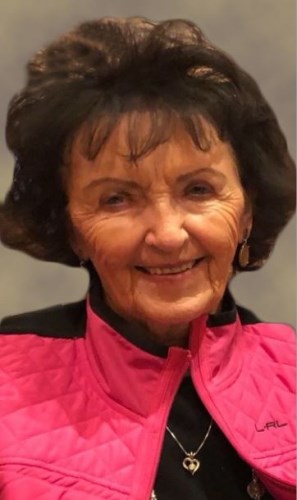 Betty Jean Goold Karlson, a 91-year-old resident of Burley passed away Saturday, June 5, 2021, in her home.

Betty was born November 28, 1929, (Thanksgiving night) at her grandparents' Smith home in View, a small community southeast of Burley. She was the first of eight children born to Marion Lavell and Iona Smith Goold. She was a member of The Church of Jesus Christ of Latter-day Saints and a seminary graduate.

Growing up on a farm she learned the value of hard work alongside her two brothers; Keith and Chuck, cutting and picking potatoes and topping and loading beets by hand onto a truck. It was very hard work and the long days ended with milking cows, along with other chores to do with the pigs, chickens, and her favorite, the horses. She spent a lot of her years tending to her younger siblings and earned the nickname of "Hen!"

Her first eight years of school were spent in a small brick schoolhouse out in View with two grades per classroom. She walked one-and-a-half miles uphill in both directions to and from school every day in rain, wind, and snow; cold memories!

She graduated from Burley High School in 1948, and her first job was working at the Burley Rexall Drug Store Soda Fountain beginning her senior year of high school.

She worked 44 years as a bookkeeper alongside her husband, Wes, in their co-founded company, Wes's Welding. She always spoke highly of their employees and customers.

They spent 64 years living in Burley and 30 winters in Rancho Mirage, California, playing golf and enjoying warm weather until his passing in 2012. She continued enjoying another five years of warm winters in California and had lived and resided in Burley until her passing.

She was an active member of the ladies golf association, the Beta Sigma Phi Society, as well as several other organizations. She enjoyed many years playing cards in Bridge groups and card games with friends and family. She and Wes traveled to many golf resorts throughout the United States hitting that little white ball around! Fond memories!

She loved traveling to the Philippines as well as Sweden, Denmark, Ireland, France, England, Wales, Nova Scotia, Halifax, Prince Edward Island, and Alaska to visit a grandson and his family; other additional travels included many places within Canada, Mexico and many states within the US.

She loved the outdoors and was very active; walking, working out and yoga training at health clubs at 6:00 a.m. for years! Focused on healthy eating habits, she always tried to keep a positive attitude!! She strived to teach her children and grandchildren the value of hard work, honesty, and integrity, to be kind and understanding to others.

She was preceded in death by her husband, Wesley LaDell; her parents, Marion LaVell and Iona Goold; three brothers, Keith, Charles(Chuck), and a baby brother, two sisters, Rae LaDell, and Marilyn Heward; two granddaughters, Jennie and Tammy Whittaker; and her adopted daughter and exchange student from Australia, Judy Fronk.

In lieu of flowers, the family suggests memorials be directed to Primary Children's Hospital in Salt Lake City, Utah, or a charity of your choice.

Services are under the care and direction of Rasmussen-Wilson Funeral Home.