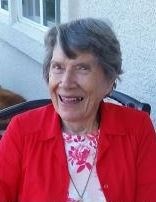 Billie Jean Fryar Sutherland was born at home in Melrose, New Mexico, on July 16, 1926, to Eura Belle Cruse Fryar and Robert P. Fryar. She passed from this world in Reno, Nevada, on November 10, 2021, from old age and complications from hip replacement surgery. She lived a long, active, happy life and will be missed by her family and those who knew her.

Jean spent her early years in Melrose, New Mexico, on the family farm and various other homes in town. It was a hardscrabble life during the Great Depression. A vivid memory for her was the fire that consumed the farmhouse when she was in high school. She graduated from high school when she was sixteen, and longed to go to college, but there was no money available.

She eventually made her way to Oakland, California, during World War II and found clerical employment in San Francisco. It was in the Bay Area that she met the love of her life, Steve Sutherland. Steve's mother actually introduced them because she thought Jean was perfect for her son. They married on December 20, 1947, in Flagstaff, Arizona, and celebrated 60 years of marriage until Steve's passing in 2007.

Jean and Steve lived thirty-plus years in Elko, Nevada, where Steve was a State Farm Insurance agent and Jean did clerical work in the office. They raised their three sons in Elko, enjoying the boys' sporting events (mostly golf), hunting, and fishing. Jean was an excellent golfer herself, shooting two holes-in-one. She was a cutthroat card player, too, enjoying bridge into her 90s.

After retiring in 1986, Jean and Steve moved to Twin Falls, Idaho, to golf, garden, and play bridge. She fondly spoke of her Twin Falls friends. She remained there until 2018 when a fall and hospital stay caused her to reconsider living alone at 93. She moved to Reno, Nevada, and resided at Atria Assisted Living facility. This move brought her closer to family.

She is predeceased by her parents Belle and Robert Fryar, her younger brother Nicholas Fryar, and three half-siblings: Keightly, Zella Mae, Babe (Robert J.), and her husband Stephen A. Sutherland.

No services are planned. Jean's ashes will be placed with those of her husband Steve's in a favorite hunting spot in Elko, County. We would like to thank those who helped care for Jean in Reno including the staff at Atria, Sierra Manor (Esther and Lisa), and St. Mary's Hospice nurses-they were truly invaluable. Jean would appreciate a donation to your local animal shelter in her name earmarked for cats, as she loved cats, especially black ones.

Published by Magic Valley Times-News on Nov. 21, 2021.
To plant trees in memory, please visit the Sympathy Store.
MEMORIAL EVENTS
To offer your sympathy during this difficult time, you can now have memorial trees planted in a National Forest in memory of your loved one.
MAKE A DONATION
MEMORIES & CONDOLENCES
0 Entries
Be the first to post a memory or condolences.