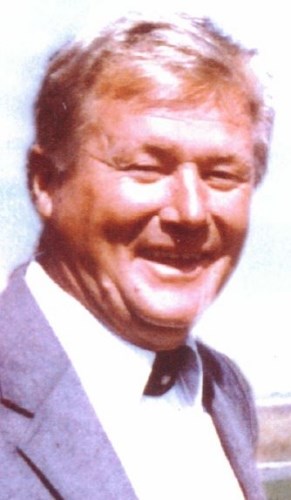 Denmar "Denny" Glenn Weigt went to Heaven on June 6, 2021. He was born in Menno, South Dakota to Leonard Weigt and Barbara Mueller Weigt on May 1, 1933.

He, his parents, and two brothers moved to Idaho in 1945 after the devastating drought and cholera outbreak in South Dakota. They arrived in Jerome in a 1936 Chevy with all their belongings and very little cash in their pocket.

Denny was born to be a cowboy from the very beginning of his life. His white shirts, pressed jeans, belt buckle and fancy boots were his signature look through and through. Denny loved his country and the years he spent in the National Guard. He graduated from Jerome High School in May 1951 and played basketball on the varsity team, starting as a sophomore. He excelled throughout his school years in athletics. Denny was a life-long Lutheran and proud to tell you so.

After a divorce, he moved from his ranch in Derke, Oregon, back to Jerome which again became his home. Soon after, this tall, blonde cowboy saw a stunning teacher walking up the street in Jerome. He drove up to Sandra's door and introduced himself. Denman Glenn Weigt became the true love that Sandra had always desired. He also found out that a beautiful, dark haired little girl of Sandra's, by the name of Larke, came with the package. He then became the best dad that he could be, and he was her dad from that day forward. Before, and after they were married, on June 12, 1970, the three of them spent many years making memories, always being together.

In 1982, they built a home south of Jerome that was to be their little piece of Heaven. They named their ranch the DSW Ranch. The two of them worked summer and winter perfecting their piece of paradise. Summers were working in their hayfields and moving sprinklers. They raised and purchased running quarter horses and raced them all over Idaho. They were fortunate to win a number of big races and their home in Jerome is decorated with trophies and victories. Denny and Sandy loved the life that they had on the farm.

Denny was known as a straight shooter with integrity, and we will never forget him. Until we meet again, go rest high on that mountain Denny. The world was better and brighter because you were in it.

Denny is survived by his wife, Sandra; their daughter, Larke; son-in-law, Gary Adams; and only one of his seven brothers, Harley of Twin Falls.

He was preceded in death by his parents; six brothers: Edgar of Jerome; Raymond of Indiana; Ivan of Arizona; Willard of Jerome; Clarence and Alton, both of Texas.

Memories and condolences may be shared with the family on Denny's memorial webpage at www.farnsworthmortuary.com.