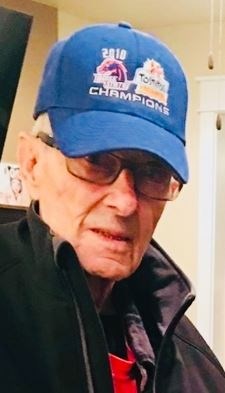 Don Keith Williamson 89, peacefully passed away at home in Twin Falls, Idaho after a long illness. He was born on January 7, 1932, in Appleton City, Missouri to Eunice and Charlie Williamson. Don's family moved from Missouri in 1937 because of the drought when he was five years old. They traveled 1500 miles with their belongings and around $100 in their pocket with hopes for a brighter future in the Gem State of Idaho.

Don attended school in Filer, Idaho, and joined the Army in 1951, serving four years during the Korean conflict. He served most of his military time in Germany. Don worked hard all his life. He started at Challenge Dairy, then ended up at Young's/ Darigold. He worked, fished, and hunted hard. His family and friends enjoyed and laughed at his stories and philosophies of life, (Barbara always in the background rolling her eyes). His favorite past times were spent hunting, fishing, and camping with his sons and family. Don & Barbara loved and attended many Boise State Bronco football games and both Fiesta Bowls. His final years were spent with his brother Gene picking him up and going fishing out to Salmon Dam.

Don was preceded in death by his parents, a sister, and three grandchildren.

Don was known by many names, Deuce, DamPa, Papa Don, Doctor Don, and Mr. Goodwrench. He is now free, fishing on the banks waiting for the big one to catch his line.

A Celebration of Life will be on September 4, 2021, from 4 to 7 p.m. at Rosenau Funeral Home Community Center at 2826 Addison Ave East, Twin Falls, Idaho.

Published by Magic Valley Times-News from Jul. 16 to Jul. 18, 2021.
To plant trees in memory, please visit the Sympathy Store.
MEMORIAL EVENTS
Sep
4
Celebration of Life
4:00p.m. - 7:00p.m.
Rosenau Community Room
28226 Addison Ave E., Twin Falls, ID
Funeral services provided by:
Rosenau Funeral Home & Crematory
MAKE A DONATION
MEMORIES & CONDOLENCES
Sponsored by Rosenau Funeral Home & Crematory.
2 Entries
Barbara and family, I am so sorry to hear about Don. My prayers are with you as you begin this journey called grief.
Pamela Dowd
Friend
July 19, 2021
Don was such an amazing, kind, loving and giving man. There was nothing he wouldn't do for his family. I always enjoyed talking to him, he could make you laugh and he warmed my heart. He will be missed by all that knew him. Prayers and love going out to the family. God bless.
Trudy Wolf
Friend
July 16, 2021
Showing 1 - 2 of 2 results