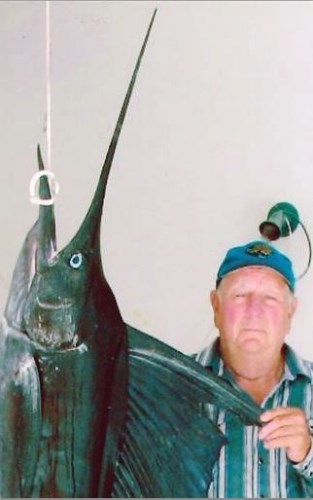 Floyd Edward Wheeler was born November 15, 1934, in Castleford, Idaho (he always said he was born on the football field…. not sure if that part was true or not) and passed away in San Carlos, Mexico at his home there on September 22, 2021. His parents were Floyd Thomas Wheeler and Della Ann Elizabeth Burgess from Tennessee.

He was raised and educated in Castleford, Idaho as well. He married Anna Lee Clifford in Hagerman, Idaho on August 12, 1956. They had 3 children Bruce, Jeff, and Kay. He farmed almost all his life in the Castleford area as well as in the desert at Blue Gulch which is in Owyhee County. He and my mother and brothers took the ground (2000 acres) out of sagebrush in the late 1960s. He and our Grandpa Wheeler drilled the wells on the place there. Many hard years were working out on the farm with the crops and raising beef cattle. He also farmed out to Roseworth.

Dad loved his dogs, having many different ones over the years…Puggy, Poncho, Ponchita, George, Frieda, and most recently Linda that he thought world of. He also had a love of vehicles and was fortunate enough to have many over the years. I think we all wondered sometimes just how many vehicles he was going to get and what would be next, but he did love his vehicles. He and our mother also enjoyed many years traveling to San Carlos, Mexico, and having a home down there. There are many great memories of family visiting Mexico. He loved to fish whether that was in Mexico, Alaska, Canada, or out to Salmon Dam with his brother Jim and the grandkids especially when they were younger.

After our mother passed away on October 28, 2014, He said he always wanted to go to Australia and New Zealand and in the Fall of 2015, his daughter Kay and he went on an adventure I'm sure neither would ever forget. Sometimes he would do things that his family didn't always agree with but was always very strong-headed and did what he wanted and when he wanted but we loved him and will miss him very much. Bruce said he was never a micromanager he usually just drew it out in the dust with a stick or a piece of sagebrush.

A celebration of life for Floyd will be held on Friday, October 15, 2021, at 10:00 am at the Hagerman Christian Center in Hagerman. Services will conclude at the church.

A private family inurnment will take place on a later date at the Hagerman Cemetery.

Funeral arrangements are under the care and direction of Demaray Funeral Service – Gooding Chapel.

Condolences, memories, and photos can be shared with the family by following the obituary link at www.demarayfuneralservice.com.

Published by Magic Valley Times-News on Oct. 10, 2021.
To plant trees in memory, please visit the Sympathy Store.
MEMORIAL EVENTS
Oct
15
Celebration of Life
10:00a.m.
Hagerman Christian Center
Hagerman, ID
Funeral services provided by:
Demaray Funeral Service - Gooding Chapel
MAKE A DONATION
MEMORIES & CONDOLENCES
Sponsored by Demaray Funeral Service - Gooding Chapel.
2 Entries
Ed was one of a kind! For sure. I couldn´t count the number of vehicles he bought either? An his fair share of Tractors as well! I always loved to imitate his voice! You certainly knew when Edwardo was around I for one will miss him calling me and start the conversation with"what did you do"
Creed Wright
Friend
October 11, 2021
Our sincere condolences to the family. God bless.
Marsha Dilley (Winkleman), Jay Winkleman
October 11, 2021
Showing 1 - 2 of 2 results