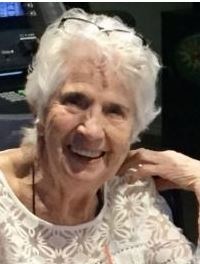 Irene Giraud Neilson Guisasola passed away on Monday, June 7, 2021. She was born December 28, 1927, the fifth of seven children born to Joseph Giraud and Rosa Blanchard Giraud who immigrated from France. She grew up in the Paulupert area where her parents raised sheep.

She married Glenn Neilson and they built a home and farmed in the Jackson area where they raised their family – Sterling, Steve, Scott, and Sally. Besides her natural-born children, she was a "mother" to many others. She also had a career at the lab in Roland Jones's potato plant. After the kids were grown, she and Glenn divorced and she married Sam Guisasola, living happily with him until he passed away.

She outlived nearly all her old friends, so she just filled her life with new ones. As a daughter-in-law said, "Irene was practical, loving and an optimist who made lemonade from life's lemons many times over, despite whatever got thrown her way."

Always a Democrat, she was a party delegate and proud of the time she worked with Frank Church. As a lifelong lover of science and learning, she wanted her body bequeathed to the University of Utah.

To plant trees in memory, please visit our Sympathy Store.
Published by Magic Valley Times-News on Jun. 9, 2021.
MEMORIAL EVENTS
No memorial events are currently scheduled.
To offer your sympathy during this difficult time, you can now have memorial trees planted in a National Forest in memory of your loved one.
MEMORIES & CONDOLENCES
0 Entries
Be the first to post a memory or condolences.