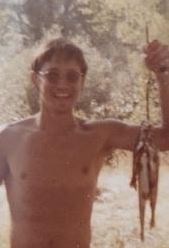 Jeffery Paul Shetler 67. Passed away June 2, 2021, in Shoshone Idaho, surrounded by family after a brave battle with bone cancer.

Jeff was born to Paul and Neva Shetler on January16, 1954, in Jackson, Minnesota. The family soon moved to Filer Idaho. Jeff married Jan Hedger and they had two sons, Isaac and Matthew. They later divorced and Jeff moved between Arizona and Idaho doing handyman work wherever he could find it. He was very good with his hands and loved working for people who just needed a helping hand. Jeff loved kids and was always a kid at heart. At family gatherings he attended, he could always be found out playing with the kids. He always had a strong faith in Jesus and could quote Bible scripture as proficiently as most pastors and tried to live his life by those teachings and share them with anyone who would listen.

Jeff was preceded in death by his mother Neva Shetler. He is survived by his sons, Isaac and Matthew Shetler, father Paul Shetler(Polly), his siblings Gary Shetler(Linda), Mike Shetler(Carol), Pete Shetler(Esther), Debbie Stinson(Brad), Jack Shetler(Raynay), Tim Shetler(Kelli) as well as many nieces and nephews. A private family celebration of Jeff's life will be held at a later date.

To plant trees in memory, please visit our Sympathy Store.
Published by Magic Valley Times-News on Jun. 6, 2021.
MEMORIAL EVENTS
No memorial events are currently scheduled.
To offer your sympathy during this difficult time, you can now have memorial trees planted in a National Forest in memory of your loved one.
MEMORIES & CONDOLENCES
4 Entries
He was a good person and friend. I know that he is walking with Jesus
Debbie Haye
Friend
June 9, 2021
Jeff was a classmate, and a very kind friend to all! You will be missed!
Donna
Friend
June 7, 2021
My thoughts go out to the entire shetler family
Phil
June 6, 2021
Thinking of the entire Shetler Family during this time of sorrow. Praying for all of you!!
Lauren Reed Blass
Family
June 6, 2021