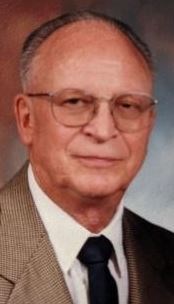 Lynn B. Pettingill, 90, of Twin Falls, passed away Saturday, November 13, 2021, surrounded by his family. He was born January 31, 1931, in Elba, Idaho to Inez Caroline Parish and John Basil Pettingill. He was raised in Elba where he spent countless happy hours fishing the creeks and hunting all over the mountains with his beloved dog Pooch. In high school, he lettered in all four sports and although he played forward on the basketball team, he always did the jump ball because no one could outjump him and few could outrun him. Lynn loved growing up in Elba and he recounted numerous tales of his adventures as a youth to his children. In 1949 he graduated from Albion High School.

Lynn served in the U.S. Army from 1951-1953 where he was trained as a tank radio operator and he played 3rd baseman for the Fort Hood Baseball Team. Starting in 1954 he spent two years working in Alaska, first in the fish cannery and then on the oil rigs.

Lynn used his GI Bill to attend the LDS Business College where he met his sweetheart Elaine Stockdale. They were married in the Logan Temple in 1956 and together they had five children. His family brought him the greatest joy and he was a very involved father attending countless ballgames, dance recitals, and other events his children participated in.

Within a year of marriage, the couple moved to Twin Falls, Idaho where Lynn acquired a sewing machine dealership. Later, he worked for Miracle Water of Idaho (now Kinetico) and eventually purchased the business in 1983 where he worked until retirement.

Lynn was an active member of the Church of Jesus Christ of Latter-day Saints throughout his life where he served in the Sunday School Presidency, the Bishopric, and on the High Council. He and Elaine had the opportunity to serve together in the Boise, Idaho temple for seven years.

He is preceded in death by his parents, wife Elaine, daughter Alene, and siblings Dick Pettingill, Amy Loveland, and Donna Ward.

He is survived by his children Kerry (Julie) Pettingill, Wade (Vernae) Pettingill of Twin Falls, Karen (Kelly) Gleave of Mesa, Arizona, and Sally (Garth) Liechty of Kimberly, Idaho as well as 19 grandchildren and 27 great-grandchildren

Funeral services are under the direction of Lance Cox and the staff at Farnsworth Mortuary and will be held Saturday, November 20, 2021, at 10:00 a.m. at the Church of Jesus Christ of Latter-day Saints in Elba, Idaho, with a viewing an hour prior. Burial will follow at Franklin, Idaho Cemetery. The zoom option for the service can be viewed at the link below. https:/zoom.us5462950345?pwd=SzFBTjR1UDhtVTh2Ui80NTYrbFlmZz09

Published by Magic Valley Times-News on Nov. 18, 2021.
To plant trees in memory, please visit the Sympathy Store.
MEMORIAL EVENTS
Nov
20
Viewing
9:00a.m.
Church of Jesus Christ of Latter-day Saints
Elba, ID
Nov
20
Service
10:00a.m.
https:/zoom.us5462950345?pwd=SzFBTjR1UDhtVTh2Ui80NTYrbFlmZz09
ID
Nov
20
Funeral service
10:00a.m.
Church of Jesus Christ of Latter-day Saints
Elba, ID
Funeral services provided by:
Farnsworth Mortuary & Crematory
MAKE A DONATION
MEMORIES & CONDOLENCES
Sponsored by Farnsworth Mortuary & Crematory.
1 Entry
Sending my heartfelt sympathy, love and prayers at this time to Kerry (Julie), Wade, and the whole Lynn Pettingill family. Lynn was an amazing man, a great husband, father and grandfather. His legacy is a life of service, hard work, love generosity and and a tremendous posterity who exemplifies and magnifies what he taught them and how he lived- by example. What a great man! He will be greatly missed. Teresa Pettingill and family
Teresa Pettingill
Family
November 18, 2021
Showing 1 - 1 of 1 results