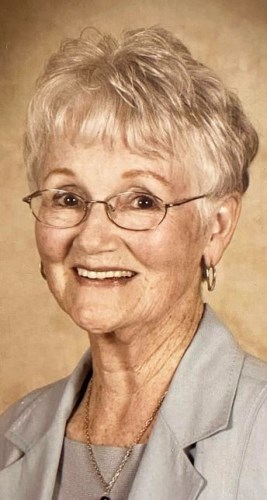 94 years ago Mable Holmes was born in the family home at Benson Ward near Logan, Utah, and died November 14, 2021, in Meridian, Idaho, surrounded by her children.

She was born to Joseph Lloyd and Mabel Baugh Holmes as the seventh of 11 children in a hard-working farm family. When Mable was two years old the family resettled to Burley, Idaho, and established an 80-acre farm in the Pella Ward community. She started first grade at five years old, quickly excelled in her studies, and at 16 became the first secretary for the superintendent of Cassia County School District. She developed exceptional secretarial skills in shorthand, bookkeeping, and multiple other office procedures.

From an early age, Mable was involved in music. She played by ear and became an accomplished organist, pianist, singer, and even played the accordion. She and her sisters played instruments and sang at funerals and local events. Mable participated in a ladies' singing group called The Sweet Adelines, as well as a quartet "the Notables", which she loved. She accompanied many soloists on the piano as well.

She attended one semester at BYU, then returned home to marry her childhood sweetheart, Robert S.Judd, while he was home on a short leave from WWII Bootcamp before being shipped out for active duty. After the war, they settled in Burley, bought a 60-acre farm, raised crops, livestock, and chickens, along with five children. They built their first home themselves. It had only two rooms and no indoor plumbing, but life was good. Through the years they built several more homes. Mable helped design the floor plans, oversaw the construction, and added the final design touches.

Mable, Bob, and the family moved to Idaho Falls, Idaho in the early 60s where Bob worked in an insurance venture, and Mable worked as a secretary for an accounting firm. They returned to Burley in 1969 and continued a successful farming life.

Mable was an active member of The Church of Jesus Christ of Latter-day Saints and contributed weekly with her musical talents. For years she used her shorthand to record patriarchal blessings and then transcribe and type them for the recipient.

After Bob's death, she married Roy Southwick and lived in Idaho Falls for 15 years. After Roy's death, she then moved to Boise, Idaho to be closer to family.

She had a happy, full life and will be greatly missed by her family.

She is survived by children Dr. Lynn and Linda Judd of California, Marva and John Williams of Utah, Steve Judd of Idaho, Bonnie and Ted Tracy of Idaho, and Beverly and Hal Baird of Idaho; 19 grandchildren; 60+ great-grandchildren; and brothers, Dean (Maureen) Holmes, Derrahl (Faye) Holmes, and Wayne Holmes.

A live webcast of the funeral will be available at rasmussenfuneralhome.com