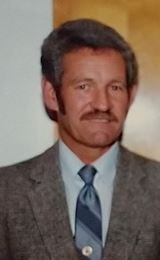 Manerd "Newt" Wall passed away at home in the early morning on December 29, 2021. Manerd was born, raised, and lived most of his life in Rupert, Idaho. At the age of 20, he secretly eloped with his sweetheart Marilyn Jarvis and so they began their lifelong journey together. He was a man of many talents, a jack of all trades. He was a gas station attendant, a carpenter, a Deputy Sheriff, a truck driver/liaison for the Minidoka Highway Dept. He earned his real estate license, bought Pioneer Realty, and sold real estate. Last but not least, he finished his working years at what he enjoyed the most, doing upholstery and going downtown for coffee with the guys every day.

Manerd loved the old west and reading every western paperback written. He was enthralled with Native American history and enjoyed building authentic style bows and arrows. He spent nearly all of his life in the great outdoors. Every year along with his brothers he spent two weeks backpacking in the wilderness of Idaho. They camped every spring in the desert north of Rupert and every fall throughout Idaho for deer, elk, and turkey hunting. Manerd had two favorite places on this world, the desert north of Rupert and the Salmon River in Stanley, Idaho.

Manerd taught his kids and grandkids many things, including how to work on their own cars, carpentry, and how to ride a Honda 90 motorcycle. Most importantly, he taught how to hunt, camp, and backpack, passing on the love for Idaho's great outdoors.

Manerd was a proud lifelong member of the Rupert Elks Lodge, holding many positions including Exalted Ruler and District Deputy of the Eastern District of Idaho. In his retirement, Manerd and Marilyn traveled the US in their motorhome staying at many Elks Lodges. The last many years were spent primarily in their beloved community of Ajo, Arizona. He was a kind and thoughtful man; he never met a stranger that he wouldn't sit down and drink a cup of coffee with and talk their ear off.

We are forever grateful that after spending 63 years together, Dad passed away peacefully in the arms of his childhood sweetheart. Manerd was preceded in death by his mother, Ella May (Wuthrich), father, John Michael, and his three brothers, Jack, Gene, and Bill.

Manerd is survived by his sisters, Nola May and Sharon Adele, his loving wife Marilyn, daughter Joi Lynne Marker (Brad), son Jeffery Manerd (Annette), and their families. No formal services are planned at this time.

Published by Magic Valley Times-News on Jan. 12, 2022.
To plant trees in memory, please visit the Sympathy Store.
MEMORIAL EVENTS
To offer your sympathy during this difficult time, you can now have memorial trees planted in a National Forest in memory of your loved one.
Funeral services provided by:
All Valley Cremation - Nampa
MAKE A DONATION
MEMORIES & CONDOLENCES
Sponsored by All Valley Cremation - Nampa.
3 Entries
Marilyn I am so sorry for you and your family Manred was a great guy fun to visit with !! Sending prayers !!
Joyce Zunino
Friend
January 15, 2022
I was so lucky to have you for a Grandpa. I love you always. When I think of the adventures we had I will smile and laugh. I will miss you and your fantastic hugs, the way you would scare us with your loud whistle everytime we came into the room, and our late night chats while watching westerns and kung fu movies. Rest in peace Grandpa until we meet again
Molly Trautman
Family
January 14, 2022
Marilyn . Thinking of you and your family.
angie homer
January 12, 2022
Showing 1 - 3 of 3 results