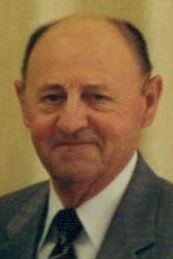 Stan was born on May 8th, 1928, the eldest son of Tom and Vlasta Novacek. He grew up and attended schools in Castleford, graduating in 1947. During this time, he helped his parents and brother, Ed, on the farm. In 1950, Stan joined the U.S. Navy and was stationed in Yokohama Japan for two years. He was assigned to the naval aircraft carrier USS Princeton and received his honorable discharge as Boatswain 3rd Class, on May 28, 1954,

Stan married Doris Mersereau in Vancouver BC Canada, on June 5th, 1954 living in Idaho for a short time before moving to Southern California. There, they raised their son Mark. Stan worked for Redi-Concrete for 40 years. Being very meticulous, at the end of each day, he would wash the interior and exterior of his truck. Contractors specifically requested him to deliver concrete because of his attention to detail and concerns to do the job right. Stan and Doris later divorced.

Following retirement, Stan moved to Twin Falls and spent many hours helping others. He held numerous offices while a member of the Elks in California and the Snake River Elks in Twin Falls. He loved being involved in community service organizations which also included the Twin Falls Masonic Lodge. He loved to dance and never missed an opportunity to go dancing. He was a member of several square dance clubs in the Magic Valley, making life-long friends. Stan also liked to go camping and fishing; he especially loved family gatherings.

When his health and vision declined, Stan moved to Chardonnay and then to Syringa Place. Stan is survived by his son Mark – Vista CA; brother Ed – Twin Falls; Nephew Ron (Stephanie)-Kimberly and Rick (Anne Maire) – Kimberly. Stan also cherished his friendship with Jerry Jonhs and Paul Sucher. He was preceded in death by his parents Tom and Vlasta Novacek and sister-in-law Pat Novacek

Stan's family wishes to thank the employees at Syringa Place and Heritage Hospice for their care and concern. Services will be Friday November 13th, at 10:00 AM at Parke's Magic Valley Funeral 2551 Kimberly Rd in Twin Falls. In addition, anyone wishing to share a memory or express condolences may do so on Stan's memorial page at www.magicvalleyfuneralhome.com

Due to COVID-19, family and friends are asked to wear masks and social distance. In lieu of flowers, memorials can be made to Shriner's Children Hospital or a charity of your choice

To plant trees in memory, please visit our Sympathy Store.
Published by Magic Valley Times-News on Nov. 14, 2020.
MEMORIAL EVENTS
No memorial events are currently scheduled.
To offer your sympathy during this difficult time, you can now have memorial trees planted in a National Forest in memory of your loved one.
Funeral services provided by:
Parke's Magic Valley Funeral Home & Crematory
GUEST BOOK
0 Entries
Be the first to post a memory or condolences.