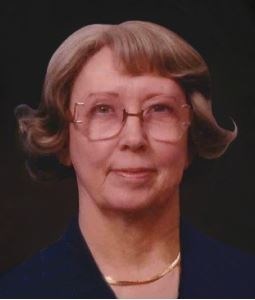 Verna Mae Lanting, of Latah County, Idaho, died of Alzheimer's Friday March 19, 2021 at the age 93 while at home with her family.

Verna was born October 27, 1927 in Mitchell, South Dakota to George and Alberta Tielebein Ganschow. Verna spent her early childhood in Mitchell where her father worked as a boilermaker for the railroad where he struggled to keep working due to his poor health. Verna was 3rd of seven children. Due to her family's financial adversities, Verna was farmed out to a neighboring family to provide child care for their two young children in exchange for Verna's room and board. When Verna was 15 she moved with her family to Palo Alto, California where her father had moved earlier, and acquired a "Flying A" service station, enabling him to bring and financially support his family. One of Verna's first real jobs was pumping gas at the family station, where she stood out as an oddity, because she and her sister Eileen were the first young women to pump gas in Palo Alto.

While finishing high school at Palo Alto High, she also worked for the Palo Alto Times newspaper in their circulation office to earn some spending money. She also volunteered as a Candy Striper at Stanford University Hospital which led to her employment in the Hospital's records department recording births and arranging for the State to issue Birth Certificates. She graduated from Palo Alto high school in 1945. After High School, she worked for a brief period at Hewlett-Packard CorporatIon building attenuators, and as a reporter for the attenuator division in HP's in- house newspaper - The Watt's Current. In 1946 Verna and two friends moved to Lincoln, Nebraska where they set out on their own. Verna went to worked in the Milner Hotel as a banquet server before going to work as a sales associate for Russel Stover's Candy.

The three friends moved to Twin Falls, Idaho in 1947. Verna went to work at the The Twin Falls Memorial Hospital recording births and filing birth certificates. Verna met a farmer, Peter Wyndelt Lanting and they were married on November 25, 1948 and made their home where Peter farmed in Hollister, Idaho. After their wedding, Verna joined Peter on the farm where she drove tractor working the fields and drove trucks delivering crops to the processors. As one of the first women in the area driving tractor in the fields and large trucks delivering the crops for processing, Verna was told several times that those were jobs for men and she had no business driving a tractor and should get back in the house "where she belonged". Verna also became one of the first three women to dump beet trucks for Amalgamated Sugar Co. LLC.

In 1950 Peter and Verna had their only child, a daughter, Tamolin Rue Lanting (Tammy). After Tammy's birth, Verna worked for a period as an Assistant Post Master at the Post Office in Hollister, Idaho before renting land to farm near Twin Falls & moving to the Kimberly/Twin Falls area. In 1957 Verna returned to school obtaining her certificate for book keeping from Twin Falls Business College. They continued farming in the Twin Falls area until they moved to Quincy, Washington in 1961 where Peter managed a feed yard and Verna went to work for National Bank of Commerce. After moving to Kennewick, Washington and then Salt Lake City, Utah where she worked for other banks, Verna became a mortgage loan officer.

After retiring from 28 years of Banking, Verna and Peter moved to Anchorage, Alaska in 1990 to live close to their daughter, her husband and their three grandchildren. In 1992, Verna and Peter traveled to Russia shortly after the fall of the Soviet Union for the U.S.'s VOCA (Volunteers in Overseas Cooperative Assistance) program to help teach the failing cooperative Soviet farmers how to farm on smaller family style farms no longer under centralized soviet control. They were a couple of the first Americans to so travel after the fall of the Soviet Union to Saratov, Russia. When they returned to Alaska, Verna applied for Social Security, received her first check for $400, and immediately returned it and looked for a new job. She found a position with Alaska's Office of Children Services where she worked for another 22 years. After retiring a second time at age 84, Verna said "I don't know how to play, only how to work".

Verna will be laid to rest next to Peter at Sunset Memorial Park Cemetery in Twin Falls. She will be greatly missed by her family and friends and departs this life with the everlasting assurance that her love and support continues in their lives and is still visible in their unlimited memories of loving and fun times shared and the many stories they will tell over and over again.

Arrangements were entrusted to Short's Funeral Chapel, Moscow, and online condolences may be sent to www.shortsfuneralchapel.com

To plant trees in memory, please visit our Sympathy Store.
Published by Magic Valley Times-News from Mar. 25 to Apr. 1, 2021.
MEMORIAL EVENTS
No memorial events are currently scheduled.
To offer your sympathy during this difficult time, you can now have memorial trees planted in a National Forest in memory of your loved one.
Funeral services provided by:
Short's Funeral Chapel
MAKE A DONATION
MEMORIES & CONDOLENCES
Sponsored by Short's Funeral Chapel.
1 Entry
May God´s loving kindness and comfort help you and your family through this very difficult time. Matthew 5:4
Lora
March 25, 2021