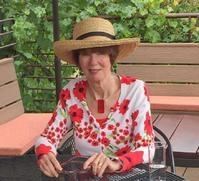 Patricia Ann Parrott was born on January 28,1943 in Burlington, Iowa to Roger and Caroline Parrott of Danville, Iowa. Her childhood on the fertile Parrott Century Farm instilled in her the importance of family and resourcefulness. She blossomed to a statuesque 5' 9" by the time she graduated from Danville High School in 1961. She earned a BA in education from the State University of Iowa in 1965, then moved to Chicago, where she became an editor and writer in the textbook division of Scott-Foresman Publishers. After marrying her first husband, Thomas Gundlach, a budding lawyer, they moved to San Francisco. They welcomed a son Christopher in 1971. She ably juggled her parental activities and her writing career. She developed a knack for crafting entertaining lessons for students to learn vocabulary, history, and environmental awareness. She found many life-long friends – and playmates for Christopher – in the San Francisco area.

In 1985, Trish married Charlie West, a financial analyst at Pacific Bell. They celebrated their wedding on a sunny April afternoon in Golden Gate Park's Shakespeare Garden. Her son Christopher and Charlie's son Michael stood, smiling, beside them. The happy couple honeymooned in the Greek Islands. In 1986, they moved to Oakland, California, where Trish continued freelance writing. She also began writing engaging columns for several neighborhood newspapers, including the Rockridge News, the MacArthur Metro, and the Montclarion. Her columns often appeared under the moniker "Westword." Trish and Charlie moved to Mendocino, California in 2000. When Trish wasn't bicycling to the Pacific Ocean bluffs, she continued freelancing and wrote merchant interviews for the local chamber of commerce newsletter. In 2005, the peripatetic couple moved to Ashland, Oregon, where Trish volunteered at the public library and the North Mountain Park Nature Center and with the Start Making a Reader Today (SMART) program at Helman Elementary School.

Trish loved wide-ranging conversations, introducing friends and visitors to Ashland's best shopping bargains, live music, walking everywhere, and baking. She was a voracious reader. She delighted in making new friends and hearing their diverse family histories. She dressed up for Halloween by repurposing her wardrobe to be, say, a lovable witch. Valentine's Day was her favorite holiday, and she hosted parties for nearly 40 consecutive years. Heart-shaped cookies and art activities for children and adults enlivened those festive afternoons.

On October 8, 2021 Trish slipped and fell. She never recovered from the trauma of the fall and passed away peacefully on October 21 as Charlie held her hand.

Trish is survived by her husband Charlie, her brothers Jim Parrott and Tom Parrott and Tom's wife Sally, Charlie's son Michael West, his wife Melyssa and their son Coltrane. Sadly, Trish's son Christopher Gundlach died in 2017. Trish would want to be remembered as gregarious, compassionate, sentimental, and fond of earrings, frozen yogurt, berets, and the color purple.
Published by Mail Tribune from Nov. 10 to Nov. 14, 2021.
MAKE A DONATION
MEMORIES & CONDOLENCES
3 Entries
We knew we were going to love living on Ocean View Drive in Oakland when we opened the front door of our wonderful new home and found on the porch a plateful of chocolate chip cookies and a "welcome to the neighborhood" note from Trish and Charlie. Trish got me involved with the Rockridge News and the library and various fire-recovery efforts, enriching my life tremendously. I'm sure she leaves a legacy like that everywhere she went and my husband and I send condolences to Charlie, the rest of the family and all her friends.
Sharon and Ira Miller
Friend
November 13, 2021
Trish was a wonderful friend. Smart and kind. Loving and fun. It was a true privilege to know her. She will be much-missed.
Margaret Wahlberg
Friend
Margaret Wahlberg
Friend
November 13, 2021
One of the best nextdoor neighbors we ever had! She lit up the lives of all of us fortunate enough to be in her colorful and creative universe, and we miss her terribly!
Patte Bishop
Friend
November 13, 2021
Showing 1 - 3 of 3 results