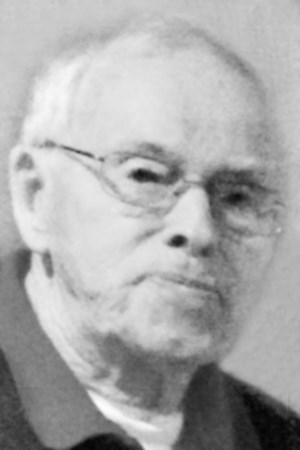 FUNERAL HOME
Dennett, Craig & Pate Funeral Homes - Saco
365 Main St
Saco, ME
Roy P. Fairfield, 99
SACO - Beloved town historian, Roy Phillip Fairfield, 99, passed away peacefully at his daughter's home in Mansfield Center, Conn., Jan. 22, 2018, with his family by his side.
He was born May 17, 1918, in Saco, the son of Wilbur and Mary Smart Fairfield.
He is survived by his wife of 78 years, Maryllyn Rumery Fairfield; his daughter, Donna, her partner Jane Fried; his sister, Nancy Fairfield Rumery; and many nieces and nephews.
He was predeceased by his sister, Priscilla Ladd Knight; and brother-in-law, Reed W. Rumery.
Roy was a proud citizen of Saco, where he served as the town historian. The Dyer Library created The Roy P. Fairfield Maine History Room to house his personal papers and many of the historical documents of the city. He organized and catalogued these documents so that other researchers could have access to information about town history, going back to its founding.
Roy was a proud graduate and lifelong supporter of Thornton Academy, in Saco. He completed his bachelor's degree at Bates College in Lewiston, and his M.A. in American history and Ph.D. in the history of American civilization (1953) at Harvard University.
He was awarded a Fulbright Professorship at Athens College in Greece (1953-54). Roy was also a life member of Bates Chapter of Phi Beta Kappa Maine.
Before his teaching career, Roy worked as a foreman and manager at Saco Lowell Shops in the late 1930s and early 1940s.
While earning his doctorate, Roy became a history professor at Bates College in Lewiston, in the 1940s. He later served as a professor of social science at Ohio University in Athens, Ohio (1957-1964), and a history professor at Antioch College in Yellow Springs, Ohio (1964-1966). He was the first director of the Antioch New England Graduate School in Putney, Vt. Roy was a co-creator and first dean of an experimental doctoral program, Union Graduate School, at the Union Institute of Cincinnati, Ohio. Roy spent his career encouraging students and friends to be creative in their thinking and to follow their dreams, no matter the struggle. He championed projects that supported dialogue, dynamic discussion of ideas, and positive contributions to their communities.
Roy was a poet, haikuist, fabulist, carpenter, lecturer, world traveler, and a nature lover. He was the author of two local histories of Saco: "Sands, Spindles and Steeples" and "Compass Points." He also authored two novels about Maine: "Amanda's Cove" and "Of Lobstering and Love;" three books of poetry: "Angles of Vision," "Doing It Over" and "Seaside Fables," and was editor of the student edition of "The Federalist Papers," as well as many manuscripts, monographs and book chapters on education and public affairs.
In addition to his work as a "public intellectual," Dr. Fairfield served as president and member of the board of directors of the Appalachian Trail Society, president and founder of the Buckeye Trail Association of Ohio and a member of Saco Bay Trails Association. He was also a member of the Saco Historical Society, The North America Humanist Society, editor of The Humanist Magazine, and a member of the Biddeford Historical Society.
A private service will be held at the convenience of the family.
Dennett, Craig & Pate Funeral Home,
365 Main St., Saco, is respectfully handling the arrangements.

Published by Portland Press Herald/Maine Sunday Telegram on Jan. 25, 2018.
To plant trees in memory, please visit the Sympathy Store.
MEMORIAL EVENTS
To offer your sympathy during this difficult time, you can now have memorial trees planted in a National Forest in memory of your loved one.
Funeral services provided by:
Dennett, Craig & Pate Funeral Homes - Saco
MAKE A DONATION
MEMORIES & CONDOLENCES
8 Entries
Roy's humor, wit and endless energy have inspired me since I knew him as the Director of the Antioch-Putney Graduate School, which I attended as a student in 1965-66. I still appreciate the puns ... the Spoonerisms maybe not so much. Condolences and fond regards to Marilyn and Donna.
Bruce Yasgur
Student
July 26, 2018
I worked with Roy in the archives when I was Director of the Dyer Library. What a wonderful, brilliant, and lovely person. He was very generous to the Dyer Library/Saco Museum. RIP.
February 2, 2018
My condolences to Marylynn and Donna. Although from Biddeford, I first met Roy in Syracuse, New York in 1971. I knew of him from his excellent history of Saco. He served as an inspiration to me in my research in local history and suggested many excellent sources to consult on local Biddeford-Saco history. He mentored many "students", young and old from everywhere. He will be missed.
michael guignard
Friend
January 28, 2018
Roy sat on my doctoral committee and ignited creativity fires whenever we spoke. Some of his encouragement led to outrageous ideas that were appropriately tamed as our discourse evolved under his guidance. What a joy to have known him! To the happy Humanist: Bravo!
Barbara Kunkel
January 27, 2018
Prayers to Roy's family on their loss of a wonderful person. I so enjoyed conversations with Roy when he visited his Dental office! His books were excellent and he will be remembered.
Cheryl Clark
January 27, 2018
What a wonderful life! My parents (now deceased) often spoke of their Bates professor. His influence had a profound impact on them and how they lived their lives, and to no small degree how they raised us kids. They were Dick & Marianne (Webber) Brenton, class of 54 and 55. My thoughts and prayers to his family.
Anne Brenton
January 26, 2018
Loving condolences to the Fairfield family. Mentor and friend to all the Dennis Clan. We will miss our creative correspondence,,visits and phone chats and" Full Moon" viewings. You are in our thoughts, John&Melanie Dennis
John&Melanie Dennis
January 26, 2018
To a life well lived...
January 25, 2018
Showing 1 - 8 of 8 results