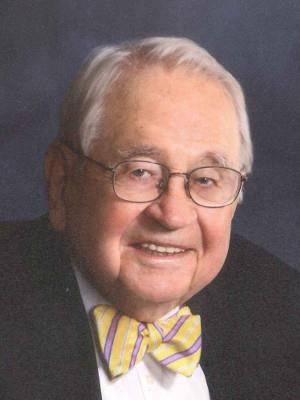 BORN
1923
DIED
2017
Otis W. Erisman of Gladwyne, PA and formerly of Nantucket, MA, passed away on December 29 at the age of 94. He is survived by his wife of 69 years, Eleanor Platt Erisman, and his children: Caroline (John Silberstein) of New York City, Susan (Philip Barra) of Danville, VT, and Steve (Betsy Milliken) of Nantucket, MA. He is also survived by five grandchildren: Ashley, Matthew (Kaitlyn Ellis), Ben, Katie, and Emily, and two great-grandchildren (Willa and Parker). He is also survived by his sister, Ruth Nelson of Kennett Square, PA, and predeceased by his parents Otis S. and Marie Schulz Erisman, and his sister, Peggy McCoy. Born in Philadelphia in 1923, Otis was a proud graduate of St. Peter’s Choir School, Phillips Academy Andover ’41, Harvard University ’45, and Harvard Law School ’48. During World War II, he served in the Navy as a gunnery officer on a destroyer (USS Sterett) in the Pacific. He was dedicated to the law, and he continued to practice until the time of his death. During his career, he was a partner at Truscott & Erisman (1949-1977), Counsel at Schnader Harrison Segal & Lewis (1977-1992), and then at White & Williams (1993-2009). Otis was a member of the Philadelphia Country Club, Merion Cricket Club, Racquet Club, Union League, and Right Angle Club. He loved good books, old movies, mixology, watches and radios, skeet shooting, and fast cars. A memorial service will take place at the Gladwyne Presbyterian Church on Saturday, January 13 at 11:00 a.m. A reception will directly follow the service at a location to be announced. In lieu of flowers, donations may be made in his honor to Phillips Academy Andover, 180 Main Street, Andover, MA 01810. Condolences may be expressed at www.ciavarellifuneralhomes.com.
Published by Main Line Media News from Jan. 8 to Jan. 14, 2018.
To plant trees in memory, please visit the Sympathy Store.
MEMORIAL EVENTS
Jan
13
Memorial service
11:00a.m.
Gladwyne Presbyterian Church
PA
MAKE A DONATION
MEMORIES & CONDOLENCES
Sponsored by Family.
6 Entries
I was just thinking of Mr. Erisman today when I learned of his passing. My late father, Paul E. Grant, became close friends with Mr. Erisman as they worked together on cases for a civil engineering company where my father was vice-president. Dealing with Penn-Dot, various municipalities, and various other litigants, my father often shared his memories of Mr. Erisman's handling of situations in the courtroom. My father did so with great respect and often humor, reflecting on Mr. Erisman's superior ability to hold court with other attorneys in the room. They never lost a case.

I had the pleasure of getting to know Mr. Erisman during the last 15 years of my father's life (deceased 2013). It was always an honor and treat to be among two old friends who reminisced on their countless times in the courtroom. I thoroughly enjoyed getting to know him while dining at the Union League, restaurants along the Main Line and in Harleysville. He always walked from his office to the Union league to meet us well into his 80's.

He made a tremendous impression on me. I will prayer for him and the entire family. He truly was a renaissance man- a man of dignity, grace and honor. My sincerest condolences.
Johan Moran
October 9, 2018
I first met Otis in 1976 when I was a new lawyer at the Schnader firm and he had just become counsel to that firm. We worked together often and it was always a pleasure to assist him. I later had the privilege of representing him in a lawsuit, in the course of which we worked together intensively and became even closer personally. After we prevailed, Otis expressed his gratitude treating me to lunch several times a year at the Union League, regaling me with tales of his life and practice and introducing me to the martini. He became a kind of adoptive uncle, a great friend and a valued colleague, and I shall always remember our time together. I just belatedly learned of his passing, and deeply regret missing his memorial service. I think of him often and will miss him greatly. My sincerest condolences to his family.
Don Lewis
Friend
April 22, 2018
My dad (Lind Bowden) always spoke highly and with great affection of Mr. Erisman. Among other activities, they drove out to the Chester Springs Shooting Club together and dad laughed about speed by which they got there! I am so sorry for your loss, but seeing his smiling face brought back many happy memories for me. I wish you solace and comfort.
Cynthia Evans
January 24, 2018
As a young lawyer, Otis took me under his wing and showed me, mostly by his example, that there was joy in the practice of law -- especially when you give it your all and stay true to yourself and your ideals. He was truly a great mensch. There was definitely a hole in my soul when I heard of his passing, but I will fill that hole with renewed memories of my time with him. I thank God that he literally plucked me out of basement to begin a career that has been vastly more rewarding because I have followed his example and kept his memory alive.
Robert Guinness
January 10, 2018
I am so very sorry for your loss. May the Father of tender mercies comfort and strengthen your family during this most difficult time.
Carol J.
January 10, 2018
I am deeply sorry for your loss. I would like to offer my sincere condolences to the Family Jeremiah 29:11 assures us God is thinking thoughts of peace towards us to give us a future and a hope In the days to come May you find comfort in that hope.
Pat
January 9, 2018
Showing 1 - 6 of 6 results