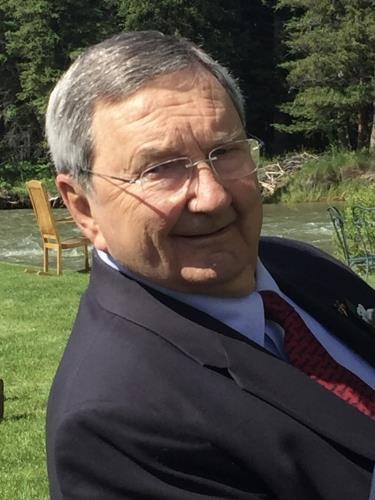 FUNERAL HOME
Stuard Funeral Directors Inc.
209 N Newtown Street Rd
Newtown Square, PA
Robert E. Tiffany, 88 on October 3, 2021, passed peacefully in Torrey, Utah while on a National Parks trip with his sons. Formerly of Wayne, PA and since 2016 Audubon, PA. Beloved husband of the late Jann (Ensor) and devoted father of Bradford (Holly), Cameron (Jeannette), Jennifer (David) Amaro and Jann Toop (Doug) Guyer. Proud Grandpa to Anna (Seth), Richard (Charline), Daniel (Jesse), Robert (Rachel), Jacqueline (Austen), Andrew, Yvette, Rainier, and Rex. Great Grandpa to Fairah, Mara, Cora, Anderson, Hartley, Lincoln, and future baby Alaric. Predeceased by one brother (Bill) and four sisters (Evelyn, Jean, Marge, Doris). Survived by brother-in-law Homer, several nieces, and nephews. Raised in Brooklyn, PA by his parents William S and Anna S Tiffany, and then Harrisburg, PA where he met his future wife Jann in high school, Robert/Bob/Tiff was a proud graduate of the University of Pennsylvania Wharton Class of 1955. He participated in Sprint Football and Lightweight Rowing teams and was a member of Beta Theta Pi fraternity. Professionally, Robert was a founding partner of the Kistler-Tiffany Companies in Philadelphia in 1974 (now K-T Advisors) where he built a successful financial planning and investment business. In 1985 he was one of five founding members of the Kistler-Tiffany Foundation, “a nonprofit dedicated to improving the lives of those in need who are mentally, socially or physically disadvantaged through no fault of their own”. Bob was a generous man and a faithful friend, companion, and mentor to many. Robert was a true teammate; he enjoyed a variety of sports including skiing, tennis, golf, and pool. He was a member of Martins Dam Club and St. Davids Golf Club. Robert travelled the world with his wife, children, and friends. He and Jann spent two decades summering in Minchinhampton, England. He enjoyed being a spectator at his children’s and grandchildren’s many sporting events. Bob was a longtime member of the Presbyterian faith. Relatives and friends are invited to his Celebration of Life Service on Wednesday, October 20th, at 11am at Wayne Presbyterian Church, 125 E. Lancaster Ave. Interment will be private. In lieu of flowers, donations may be made to KTA Funding Hope at 200 Berwyn Park, 920 Cassatt Rd, Ste 205, Berwyn, PA 19312. STUARD FUNERAL – NEWTOWN SQUARE A FAMILY TRADITION SINCE 1822
Published by Main Line Media News from Oct. 11 to Oct. 17, 2021.
To plant trees in memory, please visit the Sympathy Store.
MEMORIAL EVENTS
Oct
20
Celebration of Life
11:00a.m.
Wayne Presbyterian Church
125 E. Lancaster Ave., PA
Funeral services provided by:
Stuard Funeral Directors Inc.
MAKE A DONATION
MEMORIES & CONDOLENCES
Sponsored by Family.
5 Entries
Mr. Tiffany was my college roommate/teammate´s father and I remember fondly his calm voice of praise on the sideline of our games. An early user of "home movies", he would tape our games and proudly play them back to us while highlighting our accomplishments. Upon graduation, he and his wife gave me a placard that read: "Don´t tell your daughter to marry a doctor or a lawyer-tell her to be one." That placard occupied a place in the center of my legal office for the past 35 years. Always laughing, always happy, always supportive of his own children and the others who ran with his kids, Mr. Tiffany will always hold a special place in my heart. To Tiff (Jen), my roommate, my teammate and my friend, I will hold you and your family in the light as you grieve the loss of this extraordinary man. I hope you find consolation in the memory of his spirit and the fact that he lived life as it should be lived-with kindness, humility and especially with the gift of making everyone he met feel special. Your Dad truly made a difference in this life. Hugs to all the family.
Natalie Magdeburger
Friend
October 20, 2021
Praying for you and your family. I love you JENN
Gem
October 18, 2021
Bob & Jann, two of my favorite clients for many years, fun to plan trips for them, HRH Jann & Bob. Sympathy to all of the Tiffany family.
Nancy Volk
Other
October 14, 2021
Brad and family, sending you my deepest condolences for the loss of your Dad. You are in my thoughts and prayers.
Theresa Bongard
Work
October 13, 2021
Love you, Uncle Bob! What a prince of a man! Condolences to the family....and relish the memories.
Judy
Family
October 12, 2021
Showing 1 - 5 of 5 results