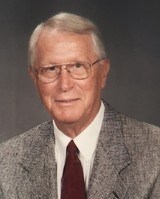 BORN
1931
DIED
2021
Delbert "Del" D. Miner
Bear Lake, Michigan
July 10, 1931 - June 14, 2021
Delbert D. Miner, loving husband, father of six, grandfather of 15 and great grandfather of four passed away at Munson Medical Center in Traverse City, Michigan on June 14, 2021, just shy of his 90th birthday. Del was born on a farm near Allegan, MI to Darl and Goldie (Commans) Miner on July 10, 1931. Early lessons of hard work and perseverance stayed with him throughout his life. Standing an imposing six foot, five inches, Del was known for getting things done for others without fuss or need of recognition, and loving his family in a quiet, fierce way. His children laugh that his stubbornness was legendary.
He graduated from Hopkins High School in 1949. He joined the United States Air Force and spent four years in the service. He began his career with JC Penney in Allegan, MI and spent 42 years with them, moving 9 times before his retirement in 1991.
On Oct. 27, 1956 he married Bonnie (Schuelke) Miner in Manistee, MI. Together they raised their six children.
Del was preceded in death by his parents; his brothers Ken (Bev) Miner, Gilbert (Betty) Miner (his twin), Russell (Pat) Miner and Jerry (Patti) Miner; his sister-in-law Bev (Ken) Miner; and his brother-in-law Ron (Barbara) McCarthy.
He is survived by his wife Bonnie; sister Mary (Harve) Norris; sisters-in-law Betty (Gilbert) Miner, Pat (Russell) Miner, Patti (Jerry) Miner, Barbara (Ron) McCarthy and Elsie (Ken) Majchrzak; brothers-in-law Harve (Mary) Norris and Ken (Elsie) Majchrzak.
He is also survived by his sons James (Peg) Miner, David (Jill) Miner, Mark (Karen) Miner, twins John (Mary) Miner and Susan (Dan) Freund, and Kathi Green; 15 grandchildren; 4 great grandchildren; and many other relatives and friends.
Per Del's wishes there will be no public service. A family memorial will be held at a later date. In lieu of flowers, those wishing to make a memorial donation may do so to a charity of their choice.
Published by Manistee News Advocate on Jun. 17, 2021.
To plant trees in memory, please visit the Sympathy Store.
MEMORIAL EVENTS
To offer your sympathy during this difficult time, you can now have memorial trees planted in a National Forest in memory of your loved one.
MAKE A DONATION
Please consider a donation as requested by the family.
MEMORIES & CONDOLENCES
0 Entries
Be the first to post a memory or condolences.