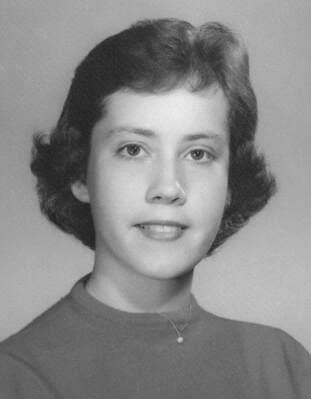 Ann was born July 30th, 1943 in Orlando, Florida to the late Bob and Lucille (Kearns) Selby her family lived in Orlando during WW II, where her father, pilot lieutenant Bob Selby, was stationed. He was killed during a mission in the winter of 1944.

Ann and her mother, Lucille, then moved back to Mansfield, Ohio; the hometown of both of Ann's parents. On April 11th, 1949 Ann's mother, Lucille, married Robert Cruickshank, owner of Pioneer Storage and Allied Van Lines.

In the Mansfield City Schools, Ann was a substitute teacher an LD tutor and tutored in the Hedges Elementary School Reading Program she also worked for Ohio brass, AAA and the Welfare Department. Ann enjoyed knitting, reading, listening to others, and working with horses.

As a lifelong Mansfield, Ohio resident, Ann was also a lifelong member of St. Peter Roman Catholic Church; and was a member of St Peter Choir for many, many years. Ann volunteered for those things in which she believed. She was a very active member and volunteer of AA, a Malabar farms volunteer, a Friendly House Daycare and Happy Hollow Camp volunteer, and she also volunteered for New Beginnings.

Ann's passion was animals, especially cats & horses. She always had a cat companion including Forsythia, her last. Ann was in the "Showing Horses Business" for 30+ years until she became ill. She was a member of the Ohio Appaloosa Association and the Michigan Appaloosa Association In 1976 Ann's horse, Auctioneer's Finale was the 1976 World Champion Appaloosa Mare.

She is survived by her friends and helpers, Bob & Dianne Esmont of Mansfield; her many friends at Logan Place Apartment and at the local AA. She does have distant cousins in California, Texas, Arizona, Michigan, Ohio, and here in the Mansfield area Brian and Micah Vasco.

A memorial gathering will be held 10:00 AM to 12:00 Noon on Friday, May 7, 2021, at Snyder Funeral Homes, 2553 Lexington Avenue in Mansfield. At noon Father Matthew Frisbee will offer a blessing. Snyder Funeral Homes, Lexington Avenue Chapel is honored to care for Ann with private cremation services. Post a memory of her online at SnyderFuneralHomes.com