Bruce Alfred Sharrow Passed peacefully after a short illness on May 29, 2014 at the age of 74. Bruce is survived by his wife of ten years, Phyllis Rogers Sharrow, his twin brother Barry (Pattie), his sister Diane (Lee) Hutchins, children Marc (Evelyn), Christopher and Marti Madias (Dean), his grandchildren, Shawn (Tara) and Casey Sharrow, Sarah Sharrow, Theo and Alex Madias, two step-children, Roger (Donna) Huffman and Tracy (Tom) Sawyer, two step-grandchildren Tommy and Ted Sawyer, along with numerous nephews and nieces and one great-granddaughter-to-be. He was preceded in death by the mother of his children and wife of thirty years, Scotti Golsch and his parents Hattie (Robert) Lauchenauer and Gene Sharrow, and his stepfather, Robert Lauchenauer. Bruce was born and raised in San Anselmo and attended St. Anslems and Marin Catholic. From an early age Bruce worked in his stepfather's mechanical shop, Locke Brothers Automotive, where he eventually became owner and ultimately worked for over 50 years. After retiring Bruce met and married a former classmate from high school and moved to Petaluma. Bruce was an avid outdoorsman who enjoyed fishing, SCUBA diving, camping, four-wheeling, HAM radios and woodworking. In retirement he spent his time playing guitar, riding his motorcycle, gardening, cooking for friends and family and volunteering at the Petaluma Elks Lodge (901) where he was a member. Above all, he loved his family and his dogs, Gracie and George. Bruce loved life and loved sharing his with his family and many friends. Honoring his wish, a celebration of his life will take place at the Petaluma Elks Lodge on June 19 at 10:30 AM. All are welcome to dress in their best sandals, Hawaiian shirts and shorts and join us in remembering Bruce's life. In lieu of flowers, donations can be made in Bruce's name to Guide Dogs for the Blind Mt. Tam Puppy Club in San Rafael.
Published by Marin Independent Journal on Jun. 3, 2014.
To plant trees in memory, please visit the Sympathy Store.
MEMORIAL EVENTS
Jun
19
Celebration of Life
10:30a.m.
Petaluma Elks Lodge
CA
MAKE A DONATION
MEMORIES & CONDOLENCES
Sponsored by MarinIJ.com.
26 Entries
Thank you one and all for your kind words and warm memories of Bruce. All of us, his family, are very grateful for the love and support of all of you.
Phyllis Sharrow
August 23, 2014
He had such a zest for life. I wish we had spent more time together. Gone too soon.
Roberta Chase
July 22, 2014
We will always remember your wonderful smile and huge heart! You are so loved, Bruce!
June 28, 2014
I will always remember the hilarious day when Phyllis was getting her attire all ready for the first motorbike ride. Did she look well in black leather - oh yeh! I will miss Bruce from selling the "cry babies" at Bingo, but he is now selling them in a much better place.

Esther Beirne
June 18, 2014
And your music career was just taking off! Didn't know you too well, Bruce, but we'll all take care of Phyllis for you. Make some sweet music in Heaven, my friend.
June 16, 2014
Bruce was a loving and kind friend, but also he could be naughty and fun. He made Phyllis so happy and they were a great team. He will be missed by so many people. Bruce will always remain in our hearts and his humor brought many smiles to all. Safe journey to your reward.
Marilyn & Gianni Pecunia
June 10, 2014
Love to a special man and high school friend. Jeanie Young
June 6, 2014
You will be missed by many
Kaye Morrow
June 4, 2014
Our thoughts are with the family and friends at this time.
Adobe Creek Funeral Home
June 3, 2014
So sorry for the lost of Bruce. Prayers for family and friends.
Donna Sharrow Melander
June 3, 2014
I remember the day you called me up at work all frantic...you had a date with a biker...didn't know what to wear...but it worked out great! And then the wedding...aww stress with getting the hair right! Got to know Bruce well....cut his hair and rode together many times...always felt safe! He has left us but never will be forgotten..ride on my man!! Love and hugs to you and your family!
Karen Jornot
June 3, 2014
Bruce, you were one of a kind. How blessed we are that one of our family's branches included you and Phyllis. The wonderful meals we shared, the fun and lively talks and especially the looks you would get when you got naughty....we will miss you.

Bob and Marilyn
Bob and Marilyn Wise
June 3, 2014
It was a delightful privilege to have known Bruce since the first grade. In the last year, he had a ' Santa' beard- and, last week, he placed an index finger on the side of his nose, and before we had a chance to say good-bye, 'up the chimney he rose- to heaven!' Love you Bruce- the Mariani's
June 3, 2014
To all the family,
May the warm memories of your dear loved one soothe you in this difficult time, and help you be at peace..
I will never forget how Bruce and I met. He was such a sweatheart and a gentlemen...RIP my biker friend...
Love ya Linda
Linda Lehto
June 3, 2014
So sorry for your loss. He must have been one heck of a man.
Marlene Rogers-Lewandowski
June 3, 2014
Knowing Bruce was a true blessing! He brought such joy to all he knew! We know you are at peace in the great outdoors with our loving Father! Rest in peace, dear one, until we meet again.
Misty Cork
June 3, 2014
I met Bruce in the early 80's at locke bros thru his son Chris and friend Jeff Forslund. He was a wonderful man with a big heart. He loved chocolate chip cookies and his bright blue eyes would light up every time I brought him a fresh batch. He will be greatly missed by all whose hearts he touched.
Loves and Hugs to the entire sharrow family. Our prayers are with you!
Sandy & Steve Petersen
June 3, 2014
Phyllis-Bruce's voice may be silent but his memory lives in the hearts of the MC Class of 57. My prayers are with you and the Family.
Fr. Alfred Puccinelli,s.m.
June 3, 2014
In the short time we had with Bruce, he was a friend and a gentleman. He continues to have a great impact on our lives. He rode off into the sunset to heaven but will always be riding with us.
Roger & Donna
June 3, 2014
Sending thoughts of peace to all of of Bruce's family and friends.
Kelli Hutchens-Dore
June 3, 2014 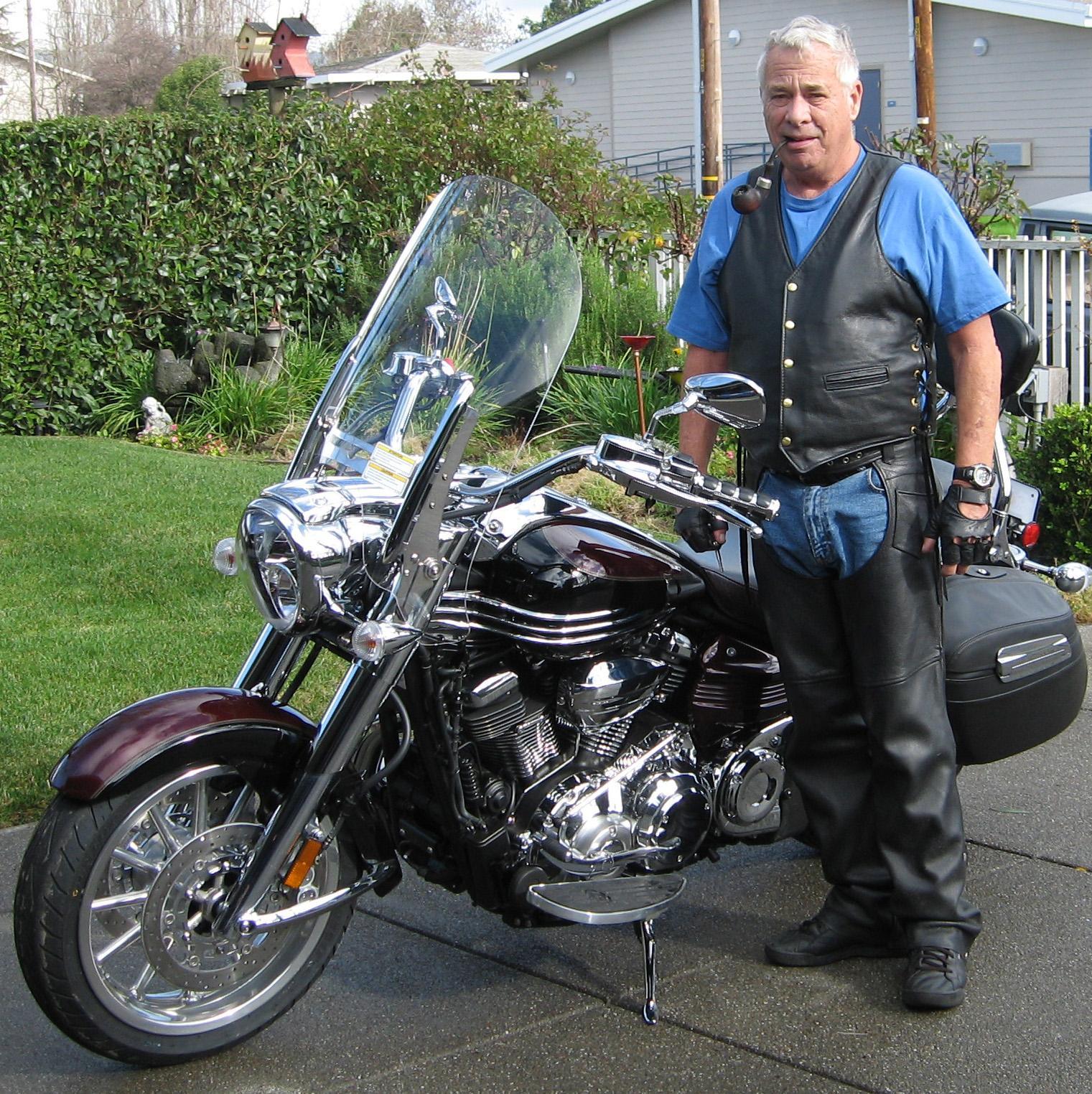 And when my journey takes me to the end of the road of life, beyond time's hidden bend, I hope my fellow travelers can say with truthful hearts A good man passed this way.”
With heavy hearts, we said goodbye to our much loved Bruce. Now he rides his motorcycle wherever he pleases. He will forever be with us.
His Loving Family ..
Phyllis Sharrow
June 3, 2014
Fond memories of riding with you and phyllis with star touring and riding...good ole days..my prayers are with you phyllis and your family...safe journey my friend
sandy hendricks
June 3, 2014
Hard to believe Dad is gone. I miss you Dad...Love your Little Princess.
June 3, 2014
My thoughts and prayers are with you in your time of grief. May your memories bring you comfort.
Linda Henris
June 3, 2014
Now there is someone to guard the pearly gates. We can almost hear you playing up a storm with our classmates who beat you there.
Bob and Mary Lu Burchard
June 3, 2014
Showing 1 - 26 of 26 results