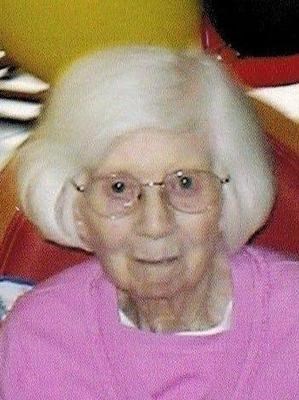 MARION: Jean Witt Maloney, 100, passed away peacefully and surrounded by family, April 25, 2014 at Heartland of Marion.

She was preceded in death by her parents, husband Keith Maloney, who died February 8, 1985 and her brother, Marlowe Witt.

Jean was a member of the American Red Cross during World War II and was stationed at McGuire General Hospital in Richmond, VA. She then spent 37 years as a dedicated elementary school teacher in the Marion City School system. She was also a member of St. Peter's Episcopal Church in Delaware, Ohio.

She is survived by daughters, Sally Howard and Sharon (Allen) Gale; and grandchildren, Mathew and Ryan Howard all of Marion, Ohio and Lindsey and David Gale of Columbus, Ohio.

Her family would like to express their sincere thanks to her wonderful caregivers at Kingston and Heartland.

In lieu of flowers, memorial contributions may be made to the American Red Cross or to the Rector's Discretionary Fund at St. Peter's Episcopal Church, 45 W. Winter Street, Delaware, OH 43015.

A Private family service will be held Thursday, May 1, 2014. On line condolences may be expressed to the family at www.boydbornfuneralhome.com


Published by Marion Star on Apr. 27, 2014.
To plant trees in memory, please visit our Sympathy Store.
MEMORIAL EVENTS
To offer your sympathy during this difficult time, you can now have memorial trees planted in a National Forest in memory of your loved one.
Funeral services provided by:
Boyd Born Funeral Home
MAKE A DONATION
MEMORIES & CONDOLENCES
11 Entries
Mrs. Maloney was my favorite teacher and I will never forget her. She didn't just teach us a lesson- she wanted us to EXPERIENCE it. I still remember- 44 years later- how we lined up our seats like an airplane and "went" to Japan..with passports and everything! Sally and Sharon, my thoughts and prayers are with you. Your mom was so loved by all and I hope our fond memories of her are a comfort to you. See you on the flip side, Mrs. M! Love, Karen Detweiler Henry
April 30, 2014
Dear Sally and family... We were so sad to hear about your loss. She is one woman who made a difference in many lives. Although your mother will be sadly missed...how awesome that you could enjoy her for so many years!! God bless...
The Merglers
April 29, 2014
I remember my parents Lew and Verna Simpson were good friends and fellow church members of keith and Mrs. Maloney.I send my condolences in their memory. God Bless!
Dick Simpson Fairfield Glade Tennessee.
April 29, 2014
Prayers are with you all! My absolute favorite teacher. Will always remember her kindness in 4th grade at Vernon, and for many years after that. Loved seeing her each Halloween with my kids, and so enjoyed her 100th birthday party! May all your memories give you comfort.
Susan Kielmeyer
April 29, 2014
Sally and Sharon, I remember your mother from my childhood days at Vernon Elementary. She was so kind to kids, and always maintained the professionalism of teachers in those days. She was among the teachers who inspired me to teach. Her impact lives on!
Sharon Gantt Gilbert
April 28, 2014
"Ginseng". Everytime I hear or see that word, I think of Mrs. Maloney. Early 70's, 4th grade, Vernon Elementary. That was the word she caught me cheating on during a spelling test (I had written it on the back of my hand in red. Not my palm, but the back of the hand. Obviously, I was a little slow back then!) and I had to go home and write it 100 times. NEVER forgot that!

A most wonderful, caring teacher who touched countless young lives in hopes of making us all better adults. She succeeded!

Rest in blessed comfort and peace and I hope you get a chance to have a nice cup of g-i-n-s-e-n-g tea.
David Zimmerman
April 28, 2014
Mrs. Maloney was my 4th grade teacher at Glenwood Elementary. She was always so kind. May wonderful memories of the wonderful lady bring comfort in the days ahead.
Cathy Walter Copeland
Cathy Copeland
April 28, 2014
I had the pleasure of having Mrs. Maloney in the 70's at Vernon for 2 years with a split grade class. She has remained one of my favorite teachers. She was so kind and gentle and such a lady. I remember her in a white blouse, a button sweater and skirt and that beautiful white hair. May all your happy memories bring you comfort as you celebrate her life.
Lisa Graham-Cook
April 28, 2014
Sally & Sharon, Hope you and your families find comfort in wonderful memories of your Mother. 60 years ago I was finishing up 1st grade with Mrs. Maloney as my teacher...still my favorite. She was a wonderful friend to our family through all the years at St. Paul's & our daughter is the proud owner of one of her amazing baby sweater creations. My thoughts are with you.
Sara Brickley McCurdy
April 28, 2014
My sincerest condolences to the family.

What a great lady and what a positive impact she made in so many young kids lives.

I had Mrs. Maloney as a teacher At Vernon Elementary in the early 70's. She was the sweetest and kindest lady ever. By far my favorite teacher of all time. There will be a special place in heaven for her.
Rest in peace.
Andy Heth
April 28, 2014
I am so very sorry for your loss. I had Mrs Maloney at Vernon Elementary. She was my favorite teacher...such a wonderful lady. I will keep you all in my prayers.
Melinda Manley
April 27, 2014
Showing 1 - 11 of 11 results