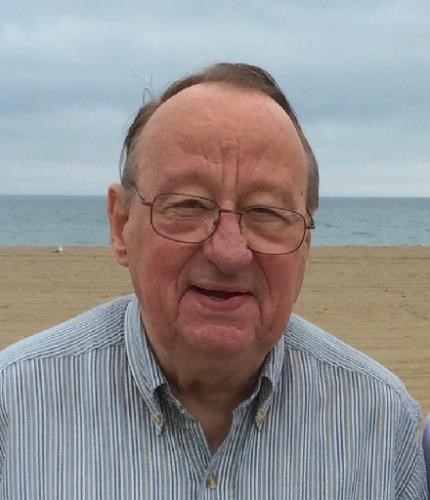 BORN
1933
DIED
2019
ABOUT
Smith Academy
FUNERAL HOME
Corridan Funeral Home - Chicopee
333 Springfield Street
Chicopee, MA
Francis E. Godin Jr. died peacefully on July 2, 2019 at Wingate in West Springfield after suffering a stroke in May. He was eighty-five.
Francis is survived by his wife of nearly 60 years, Eleanor J. (Smith) Godin of Chicopee, his son, Paul Godin of Hatfield, his daughter, Kathleen (Godin) Abood, son-in-law, Mitchell Abood, and grandsons, Matthew and Jonathan Abood, all of Belchertown. He also leaves his loving family which includes his brother-in-law, sisters-in-law, nephews, nieces, cousins, and friends. He is preceded in death by his son, David Godin of Chicopee and his sister, Rita (Godin) Prew of Hatfield.
Francis was born on September 12, 1933 in Northampton to Dorothy (Bitner) Godin and Francis E. Godin. He grew up in Hatfield and graduated from Smith Academy in 1951. He began work at Commercial College in Northampton. It was there that he met his future brother in law, Arthur Smith Jr., who introduced him to his wife, Eleanor Smith. Shortly after marrying Ellie, they moved to Chicopee and made a life there with their three children, Paul, David, and Kathy. Francis became a licensed projectionist and worked in nearly every drive-in theater and movie house in Western Mass. His career as a projectionist lead him to the installation of the interactive audio visual venues for the Basketball Hall of Fame when it first moved from Springfield College down to the waterfront location in 1985 He ran all the theater experiences at the Basketball Hall of Fame until his retirement in 1996.
Francis enjoyed many hobbies. He loved organ music, crossword puzzles and reading. He was a member of the Sons of the Desert – which is a Laurel and Hardy enthusiasts group. His two main passions were trains and movies and he shared and passed those on to his children and grandchildren. When conversation turned to movies, he was engaging and always full of insights and information about his favorite films, actors, and actresses.
Calling Hours will be from 4 to 7 pm on Sunday at Corridan Funeral Home, 333 Springfield Street, Chicopee. The funeral is scheduled for Monday beginning in the funeral home at 9 am followed by the Funeral Mass in Holy Name of Jesus Parish Church, 94 Springfield St., Chicopee at 10. The burial will follow in St. Mary's Cemetery, Northampton. In lieu of flowers, please send donations to Shriners Hospital for Children, 516 Carew St., Springfield, MA, 01104. The family would like to thank the staff at Wingate, West Springfield for their support, care and dedication. For online condolences, please visit www.corridanfuneral.com
Published by The Republican from Jul. 3 to Jul. 4, 2019.
MEMORIAL EVENTS
Jul
7
Calling hours
4:00p.m. - 7:00p.m.
Corridan Funeral Home - Chicopee
333 Springfield Street, Chicopee, MA
Jul
8
Funeral
9:00a.m.
Corridan Funeral Home - Chicopee
333 Springfield Street, Chicopee, MA
Jul
8
Funeral Mass
10:00a.m.
Holy Name of Jesus Parish Church
94 Springfield St, Chicopee, MA
Funeral services provided by:
Corridan Funeral Home - Chicopee
MAKE A DONATION
Please consider a donation as requested by the family.
MEMORIES & CONDOLENCES
Sponsored by The Family.
6 Entries
On behalf of the Laurel and Hardy Sons of the Desert Night Owls Tent # 11 we are deeply saddened by the passing of our good friend Fran Godin We would like to send our condolences to the family and friends of Fran We will be having a moment of silence in his honor at our next Night Owls meeting on September 11th
Cliff Sawyer
August 3, 2019
Dear Ellie and family,
So sorry to read about your loss. You have my prayers and deepest condolences. Our family is also grieving a loss, May God be by our side
now and always. Blessings and prayers for you and all your family.
Sue Murphy and family
Sue Murphy
July 6, 2019
Fran's love of the movies and books made for many an interesting story. Ruth and I were fortunate enough to have known Fran for over 50 years being a cousin to his wife Eleanor (Jeanie). Rest in peace good friend! Our prayers to the Godin and Smith families.
Neil Burke
July 6, 2019
We are so sorry for your loss. Love you.
Mark & Christine Johnson
Family
July 5, 2019
Kathy and family, my sincerest sympathy to you on the loss of your dad. I will always remember when we used to go to the movies when he was working there. We had so much fun! He was a very special man who will be missed. May he rest in peace.
Mary Kendall Fontaine
July 3, 2019
So sorry for your loss. May the strength of family bonds and love and support of friends ease this difficult time. My love to you all.
Holly Ruderman
July 3, 2019
Showing 1 - 6 of 6 results