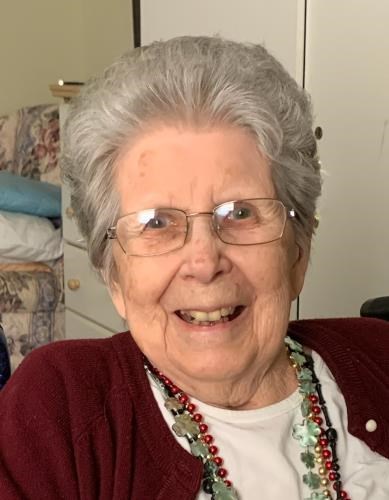 ABOUT
Easton Area High School
Betty Bloom, 91, a longtime Easton resident, passed away peacefully on Friday afternoon, October 1, at Alexandria Manor, in Bath, Pennsylvania. Born in Easton, Betty was the daughter of the late Carleton and Vada Bardo. Her sisters Norma Mamrich and Bernice Mullen preceded her in death. After graduating from Easton Area High School in 1948, Betty was married and resided in California where she had two children, Linda and Scott. She later moved back to Easton in the 1970's and worked in a variety of industries in administrative roles as she raised her children. Upon retirement in the 1990's she traveled with family, and spent time with her grandchildren, Jenn and Devon. In addition to leaving behind her two children, Linda Stocker (Dan), Scott Bloom (Mary), her grandchildren, Jennifer McCaa (Adam), and Devon Bloom, she also had three great-grandchildren, Delaney, Piper, and Gunner McCaa, and a close cousin, Mary Ann Bloom, all residing in Pennsylvania, as well as one nephew, Gary Mamrich (Heather), of South Carolina. She will be greatly missed by her family. She will be laid to rest at Northampton Memorial Shrine in Easton, Pennsylvania. In remembrance, donations may be made to a charity of one's choice.
Published by Morning Call on Oct. 7, 2021.
To plant trees in memory, please visit the Sympathy Store.
MEMORIAL EVENTS
To offer your sympathy during this difficult time, you can now have memorial trees planted in a National Forest in memory of your loved one.
MAKE A DONATION
Please consider a donation as requested by the family.
MEMORIES & CONDOLENCES
3 Entries
RIP Betty. You were such a sweet wonderful woman. I will miss you greatly. My condolences to your family.
Justin Volk Alexandria Manor
Work
October 12, 2021
Mary, just heard about the loss of your mother-in-law. I will keep you and your family in my thoughts and prayers.
Lynette Gross
October 8, 2021
RIP. My sympathies to the family.
Darlene Causey Hager
Other
October 7, 2021
Showing 1 - 3 of 3 results