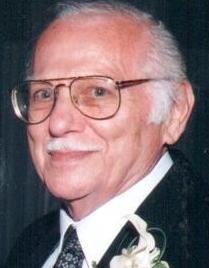 ABOUT
Palmerton Area High School
FUNERAL HOME
Campton Funeral Home - Palmerton
525 Delaware Avenue
Palmerton, PA
Frank T. Dobias, Jr., 89, of Lafayette Avenue, Palmerton, died early Saturday afternoon, June 2, 2018, in his home. He was preceded in death by his wife of over 60 years, LaRue E. (Spadt) Dobias, who passed in 2008. Born in Palmerton, he was a son of the late Frank T., Sr. and Ann (Vasko) Dobias. Frank was employed as the Director of Educational Services for WLVT Channel 39, Bethlehem, for over 20 years, retiring in 1994. Previously, he was employed as a Radio Engineer for WAEB and also as the former General Manager of Blue Ridge Cable TV. While working at WLVT Channel 39, he originated and served as Executive Director of Scholastic Scrimmage, from its origin in 1975, until his retirement in 1994. Frank was a graduate of Palmerton High School and later from DeVry Technical Institute. He enjoyed traveling, gardening, raising roses, and reading - especially historical biographies. Survivors: Son, Attorney Gary F. and wife Tammy of Palmerton; 2 grandchildren, Rebecca wife of George Saitta of Oak Hill, VA, and Jeffrey Dobias of Norwood, Delaware County; 2 great-grandchildren, Nicholas and Brayden, sister, Pat Brunner of Scottsdale, AZ., and several nieces and nephews. He was predeceased by his sister, Mary Ann Gulban, and a brother, Richard. Services: Private, and at the convenience of the family. Interment, St. John's Episcopal Church Memorial Garden. Arrangements, Campton Funeral Home, Palmerton. Online Condolences: www.schislerfuneralhomes.com Contributions: St. John's Episcopal Church Memorial Fund, 365 Lafayette Avenue, Palmerton, PA 18071.
Published by Morning Call on Jun. 6, 2018.
To plant trees in memory, please visit the Sympathy Store.
MEMORIAL EVENTS
To offer your sympathy during this difficult time, you can now have memorial trees planted in a National Forest in memory of your loved one.
Funeral services provided by:
Campton Funeral Home - Palmerton
MAKE A DONATION
MEMORIES & CONDOLENCES
Sponsored by Campton Funeral Home - Palmerton.
5 Entries
I just heard this news. I'm so sorry for your loss. Frank was a great man and my #1.
Toni Everett
January 26, 2019
Dear Gary,

My visits home almost always included joining in with Frank and my father on their Thursday dinners. I enjoyed being able to talk to your father as an adult and seeing him always brought back the great memories of the station.

I always made sure to give Frank a hug before we left each time after dinner as a handshake just wasn't enough for me to show him how much I appreciate his company and the friendship he provided to my father over so many years.

My sincere condolences
Joey Robert
June 10, 2018
Dear Gary and Pat, My sincere condolences to both of you and your families. So many memories of your father and brother....He left a hugh imprint on so many lives, especially mine. He will be missed by many. GOD bless him. Terry Eckert
June 9, 2018
Gary,
I will always remember your father as a very kind and caring person. When Frank was promoted to Dir. of School Services I was selected to fill the engineering position he previously held. It was a privilege to have known him throughout our years at WLVT.
My condolences to you and the family.
Sincerely,
Don Boyer
June 6, 2018
Dear Gary.

I have known your father for over 50 years.
I always considered him to be a good friend,
a great Thursday dinner companion, someone I could talk sports with, and someone whose company I enjoyed. What more could someone ask of a friend. I will miss him.

My sincere condolences to you and your family
on your loss.