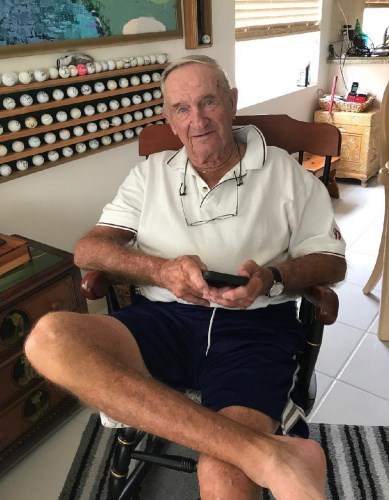 ABOUT
Governor Mifflin High SchoolKutztown Area High School
On March 10, 2021, Joseph Charles Habakus passed away in Stuart, Florida with his wife of 58 years and sons Scott and Shawn by his bedside. The son of Stephen and Helen (Kila) Habakus from Bethlehem, PA, his parents and brother, William, preceded him in death. He married Virginia (Quinn) in 1962 and had two sons, Shawn, a dentist in Douglassville, PA, and Scott, a radiologist in Charleston, S.C. The proud grandfather to Charlie, John, Lauren and Elizabeth, Pop-pop enjoyed watching and hearing of their successes in school and on the sports fields. He lived 86 years filled with family and friends, golfing and socializing until the end. A graduate of Liberty High School Class of 1952, Joe went to Business School and served 2 years in the Army prior to attending East Stroudsburg State College. There, he received a Bachelor of Science degree in Physical Education followed by a Masters Degree from Temple University. Joe taught health and physical education at Governor Mifflin for 32 years. Basketball was his passion. He began his coaching career as an assistant basketball coach at Kutztown High School under the tutelage of John Silan. This was followed by 4 years as assistant coach/freshman team coach at West Chester State prior to his 10 years as head coach at Governor Mifflin High School. He loved working with the players of all abilities, helping them grow into respectful young men as well as becoming skilled basketball players. Besides coaching his sons, his most memorable moment was winning the Berks County championship in 1979. After retiring, Joe and Ginny wintered in Hobe Sound, Florida, and spent the summers on Long Beach Island, New Jersey. 27 years of golfing, fishing, family, and all things Penn State fulfilled his retirement life. He is already missed. Interment will be at the Union Cemetery in Addisville at the convenience of the family. A celebration of life will be held in the near future

Published by Morning Call on Mar. 21, 2021.
To plant trees in memory, please visit the Sympathy Store.
MEMORIAL EVENTS
To offer your sympathy during this difficult time, you can now have memorial trees planted in a National Forest in memory of your loved one.
MAKE A DONATION
MEMORIES & CONDOLENCES
12 Entries
Coach Habakus, I am so sorry to hear about the loss of your husband Joe. My thoughts are with you and your family.

Kathy (Reich) Miller
Kathy Reich Miller
Friend
June 2, 2021
We are so very sorry to hear of joes passing. We met Joe and Ginny in Hobe sound . They were friends of my parents Herb and Pat Cannon. He was such a fun and friendly person. Prayers for your family. Love kathy Cannon Moore and Jeff moore
Katherine cannon moore
Friend
May 6, 2021
Life long friends.
Close to my family for many years.
Both 1952 graduates of Liberty High School.
From sandlot baseball to golf in our senior years, we had a steady close relationship.
Best man at our wedding.
Full spirited, aggressive, always trying to improve. Overcame many obstacles in his life.
Always a great time with Joe and Ginny.

Rest In Peace my friend.
Ed Tkacik
Friend
April 12, 2021
It is sad to hear of Joe's passing. When we were "kids" in Bethlehem, Joe, Ed Tkacik, and I "paled" around together. It was a wonderful time in our lives. May Joe rest in peace. God bless Ginny and the whole family.
Russ Weber
Friend
March 30, 2021
Loved seeing Joe at our BHS reunions. He will be missed.
My condolences to his family. May he rest in peace.

Joe Iampietro
Alexandria, VA
Joe Iampietro
Friend
March 22, 2021
So sorry for your loss. My dad (Harvey) had good things to say about him.
Donna Unger
Acquaintance
March 22, 2021
Rest in peace Coach Habakus!
John Maslar
Student
March 21, 2021
He was a mentor of mine and so many other students / athletes. Will be missed.
Gary Schade
Student
March 21, 2021
Dear Mrs. Habakus, I extend my deepest sympathy to you and your family on the passing of your your husband. I will remember him at Mass today. It’s very small world...my wife and I spend our winters in Stuart.
Leslie White, GM class of ‘65
Acquaintance
March 21, 2021
THANK YOU FOR SERVING!!
A.J. US Army Retired
March 21, 2021
Thank you for your service to our country.