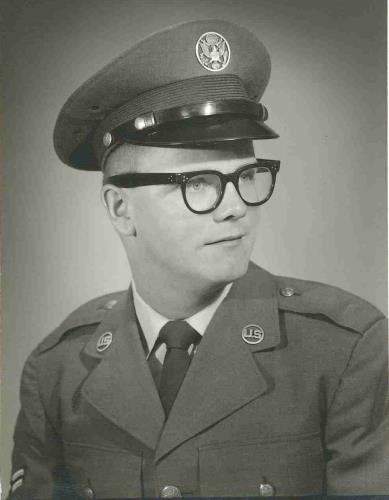 Stanley was born in Easton, PA on February 6, 1940, a son of the late Stanley S. Souders, Jr. and Arlene (Baker) Souders.

He was the husband of Donna K. (Lane) Souders. They celebrated their 55th wedding anniversary this past August. Stanley was employed as a hydraulic mechanic at American Can Company in Washington, NJ, for 38 years until retiring in 2005. After retiring, Stanley enjoyed driving school bus for the Bangor School District. He served in the U.S. Air Force during the Vietnam War.

Stanley was an antique car collector and member of the Antique Automobile Club of America, a member and former President of the Lehigh Valley Antique Car Club, and the NASH Car Club. He was also a founding member and former secretary of the Blue Mountain Antique Gas and Steam Engine Association.

He was a member of St. John's Lutheran Church in Pen Argyl, PA, where he served on the church council and was a former President of the property committee.

In addition to his loving wife Donna, Stanley is survived by a daughter, Jennifer Halbfoerster, wife of Mike, of Moore Twp., PA; and a brother, Brian Souders, husband of Diana, of Denver, CO.

A celebration of Stanley's life will be announced at a later date. Arrangements have been entrusted to James B. Gaffney Funeral Home, Pen Argyl, PA. Online condolences may be offered at gaffneyparsons.com.

In lieu of flowers, memorial contributions may be made to St. Jude Children's Research Hospital, 262 Danny Thomas Place, Memphis, TN 38105.
Published by Morning Call on Oct. 14, 2021.
To plant trees in memory, please visit the Sympathy Store.
MEMORIAL EVENTS
To offer your sympathy during this difficult time, you can now have memorial trees planted in a National Forest in memory of your loved one.
Funeral services provided by:
James B. Gaffney Funeral Home
MAKE A DONATION
Please consider a donation as requested by the family.
MEMORIES & CONDOLENCES
Sponsored by James B. Gaffney Funeral Home.
23 Entries
I'm so sorry to hear of Stanley's passing Donna. Sending my deepest sympathies to you and your family during this time.
Shelley LaBar
Friend
October 19, 2021
So sorry for your loss. I helped to take care of Stanley at the palmerton on nightshift.. he always had a smile on his face.
Jennifer Frohnheiser
October 17, 2021
This is David sidoti I worked with Stanley for a lot of years in maintenance at American can we had a great relationship I am so sorry for your loss I will truly miss him
David Sidoti
Coworker
October 16, 2021
Stanley always stopped by our spot at Hershey, he drove School bus with my daughter(Pam Beers) he was a pleasure to know. We miss him. Henry and Maryalice Hanzo
Maryalice Hanzo
October 15, 2021
Donna, Jennifer, Brian and Families, My condolences to you all. Your love and your memories will keep Stanley with you always. Sincerely, Sherry (Price/Lewis) Stecker
Sherry (Price/Lewis) Stecker
October 15, 2021
Stanley worked with me on the F Troop at the Can....larger than life personality....very sorry to hear of his passing....rest in peace old friend
Kathy Rice
Coworker
October 14, 2021
May your hearts soon be filled with wonderful memories of joyful times together as you celebrate a life well lived.
Joanne Timberman
Coworker
October 14, 2021
Very sorry to hear of Stanley’s passing. He was a hard working honest person who helped me and many others in the Blue Mountain Engine Club and the car club. RIP Stanley.
Mark Serfass
Friend
October 14, 2021
Donna and Family, I am very sorry to hear Stanley has passed. I remember a lot of great times spent with you and will miss him.
Brian Serfass
October 14, 2021
My condolences to the family, may he rest in peace. I worked with Stan and have fond memories of our time at the Can. He changed my tire in the can parking lot, telling me it wasn't a job for a woman! A true gentleman
Lisa Hess
Work
October 14, 2021
Sir, Thank You for Your service to our country. God Bless You! God be with your family! Sincerely, A Grateful US Citizen
Grateful
October 14, 2021
Fair well friend. You will be dearly missed. We enjoyed your laughs and friendship. Rest easy your pain is over. Fair winds and following seas.
Jeff & LuAnn Berger
Friend
October 14, 2021
Sir, I did not know you personally, however I would be honored to "Thank You" for your dedicated and honorable Military Service; to OUR Country. At a later date, we will meet in that "SPECIAL PLACE" which GOD has reserved, for ALL of those who have stepped forward; to serve their Country in a Military Uniform. May ALL of GOD'S blessings, be with your Dear Family! "WELCOME HOME"......... Sergeant Major (E-9) Larry E. & Mrs. Sheila M. (LaBar) Williams, US Army/ Retired (TN)
Sergeant Major (E-9) Larry E. Williams, US Army/ Retired (TN)
Other
October 14, 2021
Carol Riley
October 14, 2021
I loved working with Stanley. He taught me a lot and was always entertaining. RIP Mr. Souders.
John Merrick
Work
October 14, 2021
Thank you for your service to our country. Rest In Peace.
D
October 14, 2021
Donna, Extending heartfelt sympathy to you with your loss of Stanley, may his memory live on with you forever in your heart. Sincerely
Judi & Bill Brugler
October 13, 2021
So sorry to hear,Stanley was a great guy work with him at the CAN,,we both started around the same time and we both retired together ,,,R.I.P. Stan
Alby salter
Work
October 13, 2021
Donna, so sorry for your loss. I went to school with Stanley, and remember him a a very nice person. May he RIP.
Valerie Striba, friend
School
October 13, 2021
We are so sorry to hear of your loss. Our prayers are with you.
Fr David and Brenda Smith
October 13, 2021
Dear Donna and family, so sorry to hear of Stanley's passing.
Roger Bacon
Work
October 13, 2021
So sorry to hear of the passing of Stan. May he Rest In Peace.
Carolee (Farleigh) Post
Friend
October 13, 2021
Jenn, Mike and Donna, I am so very sorry for your loss. Sending hugs and daring prayers for you all. RIP Stanley
Donna Hillegass
Acquaintance
October 13, 2021
Showing 1 - 23 of 23 results