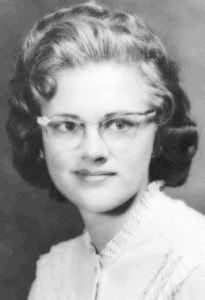 Priscilla Fender Withrow, 81, of Nebo, passed away Monday, Jan. 18, 2021, at her residence, after a period of declining health.

Priscilla was born Sept. 15, 1939, in McDowell County, and was largely a lifelong resident of Nebo. She was the daughter of the late Tonie Edgar Fender and Mary Jo Williams Fender. She grew up on Muddy Creek and graduated Nebo High School, class of 1957. She was married 50 years to Raymond "R.D." Withrow, who preceded her in death in 2008. She was also preceded in death by her younger daughter, Veronica Lynn Withrow.

Priscilla is survived by older daughter, Margot Annette Withrow; Veronica's son, Thomas Heath Herbison; his son, Noah Isaiah Herbison, who was the apple of her eye; and Noah's mother, Chelsea, all of Nebo. Priscilla was the sixth child in a family of seven siblings. She is survived by Frieda Fender Webb, Devon Fender Boyd, Odean Fender, all of McDowell County, and Donald Fender, currently residing in Virginia. Priscilla was also preceded in death by Charles M. Fender and Darrell L. Fender. She has numerous nieces and nephews.

Priscilla had a very strong work ethic, starting off at the old Roses in Marion, then Etta Paper Box Company in Marion, and was a supervisor at Carolina Shoe Company in Morganton. Afterward, she and her husband ran Fender Service Center near Valdese, Withrow's Market in Marion, a Beach Bingo, and later a floral and craft shop before retiring. She enjoyed listening to country music, dancing, handcrafts, sewing, and making unique flower arrangements. Priscilla also enjoyed gardening. She enjoyed a variety of books, notably the Bible.

No funeral services will be held due to COVID-19. Priscilla will be laid to rest at Western Carolina State Veteran's Cemetery in Black Mountain next to her husband.

In lieu of flowers, memorials should be made to one's favorite charity in her memory.

www.westmorelandfuneralhome.com
To plant trees in memory, please visit our Sympathy Store.
Published by The McDowell News on Jan. 21, 2021.
MEMORIAL EVENTS
No memorial events are currently scheduled.
To offer your sympathy during this difficult time, you can now have memorial trees planted in a National Forest in memory of your loved one.
Funeral services provided by:
Westmoreland Funeral Home
GUEST BOOK
1 Entry
Prayers for the family as they move forward.
Terry Cheek
January 22, 2021