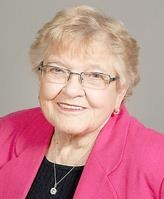 BORN
1929
DIED
2021
FUNERAL HOME
Stratford Evans Merced Funeral Home
1490 B Street
Merced, CA
Elma Lucille Diele
December 10, 1929 - July 26, 2021
Merced, California - Lucille (Lu) Diele, age 91, longtime resident of Merced, died on July 26, 2021.
Lu was born December 10, 1929 in Montrose, Colorado. She was the youngest of seven children born to Oliver Harris and Grace (Whaley) Woods. Lu graduated from Montrose High School and then went on to Western State College in Gunnison, Colorado, where she graduated with a B.A. in Education. While there she met and married her husband, Sam Diele. They both became teachers and in 1954 moved to Merced, CA. For a few years, Lu taught at Weaver Elementary but soon moved on to Merced High School, teaching physical education. A highlight was coaching with Merced High Girls' basketball team, alongside her husband, Sam. Those teams also went on to win several CCC Championships over the years. Until Lu retired, she finished her career at Merced High as a Special Education teacher.
Lu and Sam were very active outside of their teaching careers. A year sabbatical in Colorado from the MUHSD to earn additional degrees not only allowed them to further their education, but it gave them the opportunity that summer to tour the U.S. in the infamous pick-up camper with their five children. Lu was a 60-year member of Beta Sigma Phi which she belonged to with several close friends and immensely enjoyed many social activities. She also belonged to Gateway A's Model A Club, California Retired Teachers, and served as a Mercy Hospital volunteer for 25 years. She was inaugurated into the Merced Old-Timers Club, a distinction of people who lived in the county for at least 50 years and 85 years of age. Lu was a member of the Daughters of the American Revolution (DAR). She was very proud of her heritage, making several trips to Missouri and Colorado for family reunions. She also belonged to the Central Presbyterian Church in Merced. Finally, the Italo-American Lodge of Merced and the Merced Elks Club were very important to both Sam and Lu. Many beautiful family memories were cherished with those organizations.
Although Lu enjoyed several sports, by far her love for the game of golf was her favorite. Lu was a long-time member of the Merced Golf and Country Club and served as President of the 18-Hole Ladies Division. Water skiing at local lakes, camping with her family, and weekend family outings to Badger Pass in Yosemite gave her much joy. She skied well into her 70's. Traveling was her passion and she coordinated many wonderful trips. Lu and Sam visited 49 of the 50 states in the U.S. and other travels included destinations from the Great Pyramids of Egypt to the Great Wall of China, South America, the Panama Canal, European countries, and New Zealand and Australia. Lu loved to read books as it exposed her to worlds other than her own. Her other favorite pastime outside of golf was the game of Bridge. Until Covid hit when she was 90, she was playing in five different Bridge groups!
Lu was preceded in death by her husband, Sam Diele, and her parents and six siblings: Olin, Harold, Ralph, Oliver, Howard and Velma. She leaves behind five children: Jayne (Doug) Starn of Hughson; Mark (Claudia) Diele of Sacramento; Greg (Bernadine) Diele of Merced; Sam (Laura) Diele of Merced; Martha Diele (Mark Frassinelli) of Florida; plus 14 grandchildren and 11 great-grandchildren who all lovingly referred to her as "Nana."
A viewing will be held at Stratford Evans Funeral Home on Wednesday, August 4th from 4-7 pm.
Services will be held at Central Presbyterian Church, 1920 Canal Street, Merced, CA on Thursday, August 5th at 11AM. Reception immediately following at Italo American Lodge in Merced.
A Private Interment will occur at the San Joaquin Valley National Cemetery, next to her beloved husband Sam, Friday, August 6th.
In lieu of flowers, donations may be made in Memory of Lu Diele to Merced High School, for the "Sam and Lu Diele Memorial Scholarship". Make payable to Merced High School Bookkeeper, 205 West Olive Ave., Merced, CA 95344
-or- Central Presbyterian Church, 1920 Canal Street, Merced, CA 95340

Published by Merced Sun Star from Aug. 1 to Aug. 3, 2021.
To plant trees in memory, please visit the Sympathy Store.
MEMORIAL EVENTS
Aug
4
Viewing
3:00p.m. - 7:00p.m.
Stratford Evans Merced Funeral Home
1490 B Street, Merced, CA
Aug
5
Service
11:00a.m.
Central Presbyterian Church
1920 Canal Street, Merced, CA
Funeral services provided by:
Stratford Evans Merced Funeral Home
MAKE A DONATION
MEMORIES & CONDOLENCES
5 Entries
Condolences for the family. During my high school years I worked in the PE office and was privileged to get to know her. Sam and Lu were good friends to my parents. She was an amazing person.
Kathleen Pauletti Carlsen
August 5, 2021
She was one of favorite teacher she had a caring love for students always with a smile she especially took extra the time with me during swimming classes will always be thankful good memories will always stay
Rose Diaz (Navarro)
School
August 4, 2021
Lu was a wonderful lady and a fantastic teacher. At Merced High School I would often walk over to her Special Day Class just to watch her interact with her students. For me, it was relaxing.....and left me with real pride that I was watching a true pro! Both she and Sam gave me some great memories.
Joe Brucia
Friend
August 3, 2021
May the love of friends and family carry you through your grief.
The Ayala Family
Other
August 3, 2021
Offering our deepest condolences during this difficult time.
Stratford Evans Funeral Chapel
August 1, 2021
Showing 1 - 5 of 5 results