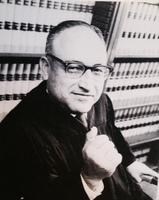 BORN
1917
DIED
2014
Melvin E. Cohn
Resident of San Carlos
San Mateo County Superior Court Judge, Retired, Mel Cohn, born to (Ben and Hattie Cohn) in San Francisco on January 23, 1917 passed away peacefully in his San Carlos home on October 30, 2014. His wife Nita passed in 2011. They were married 64 years. Survived by son, Larry Cohn (Cindy), daughter, Cathy Cohn Gilley (Jess), daughter, Janet Borg (George), grandsons Ben and Jason Cohn, granddaughters, Corinne and Casey Gilley, great grandchildren, Elan and Aria Cohn.
Graduate of Lowell High School, Cal Berkeley (Go Bears) and Bolt Hall Law School. Mel opened his law practice in San Carlos in 1947, which is still in business as Aaronson, Dickerson, Cohn and Lanzone. He was San Carlos City Attorney for 17 years. He joined the San Carlos Kiwanis Club in 1947, serving as Secretary, Vice President and President, which lead him to a lifetime membership.
In 1939 he got his first Civil Service job at the Social Security Board in Washington, D.C.
He was a proud veteran of World War II-Pacific theatre as a Master Sergeant in the U.S. Army from 1942-1946.
In 1954, Mel was Chairman of the Democratic Central Committee, later taking a seat on the Executive Democratic Central Committee.
In 1963 Governor Pat Brown appointed Mel to Judge of the San Mateo County Municipal court. In 1964 Mel became one of two Municipal Judges to ever sit on the bench of the Superior court of San Mateo County. There he progressed to be Presiding Judge three consecutive terms, and became known as one of the best mediators in the county.
Among several accomplishments, Mel was Vice Chair of the Council Justice; lectured at the California Judicial College, on panels for the State Bar Association, Trial Judge of the Year, pro tem on the Court of Appeals, one of the founders of the Service League. The San Mateo County Law Library was dedicated and bears the name Cohn-Sorenson (Keith Sorenson) today. The bench in his first court room in the Old Courthouse was dedicated to Mel.
Melvin Cohn retired from the bench on October 31, 1981, yet still worked as a mediator until he was in his 80's.
Everyone who knew him has a "Mel Cohn" story to tell. He will be remembered by so many, and missed by all.
A public memorial in his honor will be held at the San Mateo County Courthouse Museum in Redwood City on his birthday, Friday, January 23, 2015 at 5:30 p.m.
Published by San Jose Mercury News/San Mateo County Times on Nov. 4, 2014.
To plant trees in memory, please visit the Sympathy Store.
MEMORIAL EVENTS
Jan
23
Memorial Gathering
5:30p.m.
San Mateo County Courthouse Museum
Redwood City, CA
MAKE A DONATION
MEMORIES & CONDOLENCES
Sponsored by San Jose Mercury News.
3 Entries
I want to offer my sincere condolences to the family. The news of your father's passing brings me great sorrow. He was a wonderful man, committed to his community and the law. As a judge he was years ahead of his time in identifying the need for the timely delivery of justice. His intellect and his personality provided great leadership. I had the privilege of working with the court in my first court administrative position. What he taught me formed the foundation of my 44-year career in the courts nationally and internationally. As such, his legacy lives on in the operational philosophy of literally hundreds of court around the world.
Stephen Bouch
November 29, 2014
I had the pleasure of being in his courtroom on several occasions.
Judge Cohn tolerated no pretense.

You told your story as accurately as you could and trusted that a fair and wise minded judgment would be rendered.

My condolences to his family. Your dad was a great man and his life is his memorial.
Richard Levy
November 10, 2014
A great man who sincerely cared about the citizens of San Mateo County and the Court he made more effective and responsive. Thanks also to all his dedication and service in World War 2 , he was part of the "Great Generation" we will always recognize and appreciate.
Mark Forcum
November 9, 2014
Showing 1 - 3 of 3 results